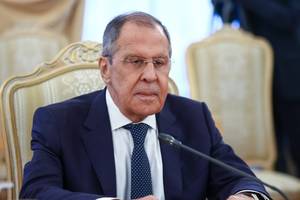 According to the press secretary of the President of the Russian Federation Dmitry Peskov, at the G20 summit, which will be held next week in Indonesia, Russia will be represented by Foreign Minister Sergei Lavrov.

“It was decided that Sergey Lavrov would represent Russia at the G20 summit,” TASS quoted the Kremlin spokesman as saying.

Dmitry Peskov did not specify whether Vladimir Putin was going to speak at the summit via video link.

The G20 summit will be held in Bali on November 15-16. It is expected that Volodymyr Zelensky will also speak at it, despite the fact that Ukraine is not a member of the G20. Earlier, the Ukrainian leader said that he would refuse to participate in the summit if the President of the Russian Federation was present at the event.

At the end of June, it was reported that Putin had accepted Indonesia’s invitation to take part in the G20 summit. Invitation from country leader Joko Widodo to attend this event in April also received by Ukrainian President Volodymyr Zelensky.

Natura Siberica will launch its own research and development center (October 28, 2022)

Shares of the day: Yandex papers are looking for a bottom (November 28, 2022)