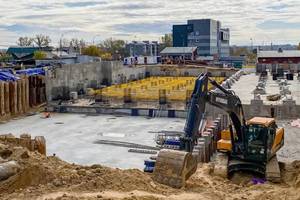 Rusatom Overseas (part of the state corporation Rosatom) reported on new construction technologies used in the construction of a nuclear medicine center in Irkutsk.

As the press service of the company notes, one of the most interesting features of the project is increased seismic resistance. “Up to 600 earthquakes a year happen on Baikal. True, not very strong – up to four points. The people of Irkutsk are used to the fact that they are constantly shaking a little. The design of the radiological building includes a standard of resistance to earthquakes up to nine points. Seismic isolators will fulfill the standard – there will be more than 200 of them, ”the press release says.

It is specified that the body of the building will have a unique foundation located below the zero mark. “It’s like three separate buildings that stand as close to each other as possible. At a mark of minus 7 m, seismic isolators are placed – metal structures that can move horizontally with an amplitude of up to 300 mm in order to dampen vibrations. Each seismic isolator is configured individually, but in such a way as to work in unison with the others, ensuring the stability of the object during an earthquake, ”the message emphasizes.

The construction of the radiological building of the East Siberian Cancer Center in Irkutsk began last year, and the foundation was laid on December 2. The concession agreement for the construction was signed between the government of the Irkutsk region and Rusatom Healthcare JSC. The project is planned to be completed in 2024-2025.

Innovations accessible to all: the VII Forum “Innovation Time” will be held on December 7-8 (November 24, 2022)

This class of machines did not exist: the miner “Agriculture” will be put on the conveyor (November 27, 2022)