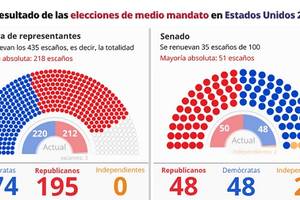 In order to regain control of the lower house of Congress – the House of Representatives, the Republicans need to get only 7 of the remaining 35 seats, for which there are no final results yet. With the Senate, the picture is still unclear. Rivals are on par: the Republicans now have a one-seat advantage and they need to get two of the three remaining seats, because if the current parity in party representation is maintained, then control because of Vice President Harris will remain with the Democrats. However, it is possible that due to the second round in Georgia, which is scheduled for December 6, the final balance of power in the upper house will not be known soon.

As we predicted yesterday, the Republican Party has failed to build on its impressive initial success. Their huge majority in the first hours was fading before our eyes, and by the time the polling stations closed, it became obvious that the advantage of the Republicans in the House of Representatives would not be so big. And definitely not as big as many and, first of all, they themselves thought.

It should be said right away that the “red wave” predicted by Trump, i.e. an unconditional, crushing victory of the Republicans did not happen.

“It’s definitely not a wave,” South Carolina Senator Lindsey Graham commented sadly on the results of the election.

The Republicans themselves are now blaming this on… Donald Trump, who was too active before the elections and predicted his party would win in both houses of Congress by a wide margin. Now it remains to wait for November 15, the day when he promised to make a very important announcement. Before the election, no one had any doubts that the ex-president would officially announce his intention to participate in the presidential election in 2024 at his Florida estate. The intrigue now is that after the not-so-convincing results of the midterm congressional elections, Trump’s chances of becoming the main candidate from the Republican Party in the presidential election have plummeted. Now these chances are no less, and perhaps even greater, for his main rival, Florida Governor Ron DeSantis, who was very convincingly re-elected to the post of governor with a 20 percent margin over his opponent. Many political scientists, by the way, are now calling him the main winner of the midterm elections.

By the way, the most impressive success of the Republicans was in Florida, which until recently was considered a swing state. In Florida, in addition to DeSantis, Senator Marco Rubio also won convincingly in the elections to the Senate.

Another winner clearly feels like … Joseph Biden, who announced to his delight that now he will certainly participate in the presidential election in two years. The president’s joy is not very clear, because even if the Democrats retain control of the Senate, even if a small majority of Republicans in the House of Representatives will significantly complicate his work in the remaining two years of his presidency.