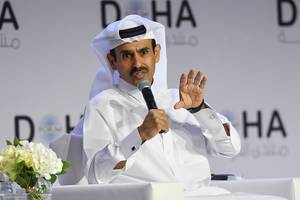 Qatar, one of the largest exporters of liquefied natural gas (LNG), has set itself the goal of overtaking the United States and becoming the world’s top supplier of liquid gas. Along the way, so to speak, in Qatar they are trying to make the state-owned gas company Qatar Energy the largest LNG trader. She, as well as the Ministry of Energy of Qatar, is headed by Saad al-Kaabi, a respected and authoritative person in the field of energy.

In an interview with Bloomberg TV, Kaabi branded the Europeans hypocrites for wanting to solve the energy crisis that has been raging on the continent for a year now by imposing gas price caps in Brussels. Moreover, they want to do it this coming winter. Two options are proposed for introducing gas price restrictions: for all natural gas, regardless of the country of origin, and only for gas from Russia. However, it is no secret to anyone, and Brussels does not hide it either, that this measure is directed against Russian gas, which Europe so passionately and so stubbornly wants to give up. Naturally, the “ceiling” for any gas implies restrictions on gas from Qatar, but in fairness it should be said that Doha is against restrictions even exclusively on Russian “blue fuel”. Saad al-Kaabi believes that the price regulator for any gas should be the free market, not orders from above. In this case, from the European Commission (EC).

“The free market is always the best solution,” the Qatari minister stressed.

Artificial limitation of gas prices is not only anti-market. It will also reduce incentives to invest in gas production and liquefaction, and thus provoke gas shortages in some countries. Mostly in the poorest developing countries, because they are not able to compete with rich developed countries. This was clearly shown by the events of the past summer and autumn on the global gas market, where Europeans, like pirates in the old days, intercepted LNG tankers, bought the cargo without skimping on money; and redirected them to Europe. By the way, Europe itself may find itself in the same position, where gas prices, mainly due to a very warm October, fell by 40%. So now it is easier for Asian countries to compete for LNG with European countries.

In March, the EC closed an antitrust investigation into contracts for the supply of Qatari gas to Europe, which had lasted almost four years and was extremely unpleasant for Doha. The Europeans were outraged by the requirement in the contracts, which restricts the resale of gas from Qatar to the buyer to other European countries within the borders of the European Union. Brussels “pardoned” Doha, of course, not out of kindness, but because it counted heavily on Qatari gas. However, in the six months that have passed since the closing of the investigation, there have been no shifts in gas relations between the EU and Qatar. Saad al-Kaabi said that Qatar Energy is still negotiating the supply of Qatari gas with the German companies RWE AG and Uniper SE, as well as, he added, with Asian buyers. Free gas will only appear in Qatar after the completion of a huge gas industry expansion program, which will allow it to become the largest exporter of liquefied gas in the world. After its completion, annual LNG production should increase by more than 60% to 126 million tons by the end of the decade. Even in the best case, Europe will be able to receive LNG from Qatar in more or less large volumes no earlier than 2026, when the development of the northeastern part of the world’s largest Northern Gas Field (NFE) begins. Until then, Kaabi stressed, Europeans’ gas difficulties will continue if Russia does not return at least to the level of summer gas supplies to Europe and if winters are not as abnormally warm as October of this year.