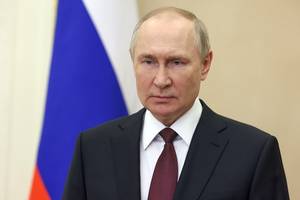 The President of Russia will not address the participants of the G20 and APEC international summits, including in the format of a video message. This was announced by the press secretary of the head of state Dmitry Peskov, answering questions from journalists.

“No, it is not planned,” RIA Novosti quotes Peskov’s answer about the possibility of such a video message.

Recall, the day before it became known that Vladimir Putin will not be present at both of these forums. According to Peskov, Russia will be represented at the G20 by Foreign Minister Sergei Lavrov, and at the APEC meeting, the Russian delegation will be headed by First Deputy Prime Minister Andrei Belousov.

ApollinePetit2 weeks ago
0 2 Less than a minute

The Ministry of Energy of Turkey announced the beginning of a partial payment for Russian gas in rubles (November 8, 2022)

KamAZ consolidated 100% of the joint venture with the German concern in Naberezhnye Chelny (November 10, 2022)