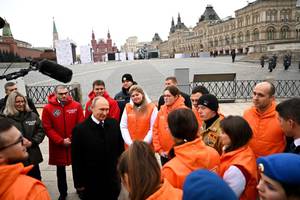 Russian President Vladimir Putin, while talking with volunteers, drew attention to the difference between Ukrainians who came to the Russian Federation and those who left for Europe, saying that they demand discounts in restaurants, but they ask us to work. The head of the Russian state also spoke about the work that is now being done to simplify the restoration of documents for these refugees.

“Feel the difference between those people who came from Ukraine to us and those who are in Europe. They go to restaurants there and demand discounts for themselves, and here people ask for work. Well, the truth is, it is, ”Putin said.

He emphasized that “without any doubt, it is necessary to help people who need help,” and said that the Russian authorities are now working to ensure that there are no abuses when restoring the documents of Ukrainian refugees, decisions are being made to simplify procedures. Putin also noted that a lot of people from the Kharkiv region are trying to get to Russia in various ways, including “bypasses”, and promised to do everything to support them.

The President also spoke about the restoration of the cities of Donbass and, in particular, Mariupol, which was badly damaged.

“Last night, my colleagues and I — it was already about twelve o’clock, by midnight — discussed the restoration of just these territories, Donbass, Mariupol, which was badly damaged. There, housing needs to be restored, as well as the sphere of social infrastructure, kindergartens, libraries, theaters and museums. Mariupol is a very famous, ancient, one might say, Russian city. Peter the Great founded, as you know, his first military flotilla there, won the first victories, then Suvorov made his steppe campaigns there, and Catherine the Second built up these lands, ”Putin added.

On Friday, National Unity Day, the President, together with members of youth and volunteer organizations, laid flowers at the monument to Kuzma Minin and Dmitry Pozharsky.

OPEC: oil demand will remain strong until the middle of the century (November 1, 2022)

The head of the Central Bank announced a five-fold reduction in the outflow of cash from Russian banks (November 10, 2022)

Putin proposed to create a global payment system based on hawala (November 24, 2022)

The Central Bank explained why it is impossible to print so much money that there is enough for everyone (November 8, 2022)