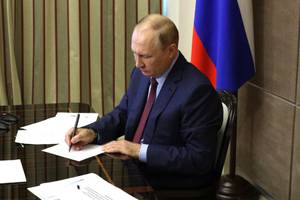 Russian President Vladimir Putin appointed Alexander Rozin, who previously held the post of chief inspector of the Ministry of Internal Affairs, to the post of deputy director of the Federal Penitentiary Service (FSIN).

The corresponding decree was published on the official Internet portal of legal information.

Rozin was awarded the rank of major general of the internal service, the document also says.

It is specified that the decree comes into force from the date of publication.

In February, Alexander Rozin was awarded the rank of major general of the police.

At the end of last year, a high-profile torture scandal in the penitentiary institutions of the Saratov region turned into criminal cases, a series of dismissals and, finally, the resignation of the head of the Federal Penitentiary Service, FSB General Alexander Kalashnikov, who lasted two years in this position. In his place was appointed Deputy Interior Minister of Russia Arkady Gostev.

“There are similarities”: Lavrov compared the conflict in Ukraine with the Caribbean crisis (October 30, 2022)