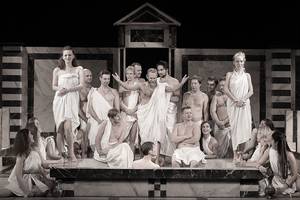 Sergey Zhenovach: “Gogol is not a naturalistic, not everyday writer. His texts, his world is a very dashing figurative structure. To perceive such compositions and work on them is happiness, joy and torment at the same time. But now it is no longer interesting to simply read Gogol’s play by roles in historical costumes. Behind the plot, which everyone usually knows, there is an inner plot, and from how you feel and solve it, the power of a theatrical composition arises.

“Even if a person has not read the play, he still knows the external plot. The storyline is known to everyone, but the play is not interesting for that. There is always an inner story behind the outer story. Here it is always the most interesting, the deepest, the most mysterious and alluring. And everyone who solves the secrets of the “Inspector General” plunges into the territory behind the plot, this is the so-called internal plot. Here it is bottomless and it is very difficult to formulate it.”

“We play this performance in blocks – 2-3 performances in a row. We have come up with a scenic and theatrically difficult space, and it dictates such an unusual scheme of work for us.

The performance runs for 3 hours and 20 minutes with one intermission.

Uralvagonzavod will employ those sentenced to forced labor (November 28, 2022)

Scientists gave advice on how to sleep so that the pressure does not increase (November 5, 2022)