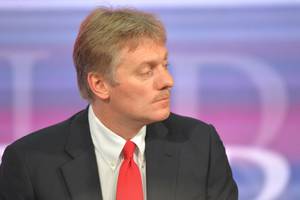 According to the press secretary of the President of the Russian Federation Dmitry Peskov, without the participation of Moscow, a deal to export grain from Ukrainian ports is hardly feasible.

“In conditions when Russia talks about the impossibility of guaranteeing the safety of navigation in these areas, such a deal is hardly feasible, and it takes on a different character: much more risky, dangerous and unguaranteed,” Peskov was quoted by Interfax.

Thus, the press secretary commented on Ankara’s statement about its intention to continue the implementation of the “grain deal” without the participation of Moscow.

Speaking about the impact of the current situation on the course of the conflict, the Kremlin spokesman noted that by his actions, Kyiv provoked the collapse of the deal, undermining the atmosphere of guaranteed security.

Peskov said that interaction with Ankara and the UN did not stop. “Contacts continue with the Turkish side, as well as with the UN through the diplomatic and other departments,” he said.

Dmitry Peskov stressed that the Russian Federation guarantees its readiness to compensate the poorest countries for falling grain volumes. The press secretary of the head of state referred to the Minister of Agriculture Dmitry Patrushev, who spoke about such guarantees.

“Taking this opportunity, I would like to remind you that only a small share of the total grain supplied under this deal fell on the poorest countries, the rest was received by the non-poorest countries located in Europe. How to do this is a complex, difficult question, and it has yet to be worked out, ”Peskov said.

Saturday, October 29, Moscow suspended participation in the “grain deal”, referring to the incident in the Sevastopol an attack by drones on Russian ships involved in securing a humanitarian corridor for the export of products from Ukrainian ports. The Russian Defense Ministry said that one of the UAVs could have been launched from a civilian vessel “chartered by Kyiv or patrons from the West to export agricultural products from the seaports of Ukraine.”

Turkish President Recep Tayyip Erdogan said earlier today that work on the “grain deal” will continue despite the suspension of Russia’s participation in it.

The zone of comfortable living in Russia has decreased by five times in 30 years (October 29, 2022)

Vladimir Putin: the foundations of Russia’s existence turned out to be stronger than even we ourselves thought (October 27, 2022)

Specialists of the YARUS social network collected statistics of the most popular Russian musicians (October 27, 2022)