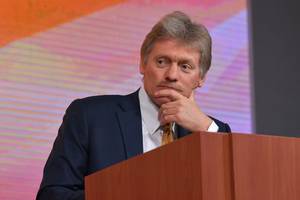 Russia is open to negotiations with Ukraine, however, in the current conditions, Moscow does not see an opportunity for them because of the position of Kyiv, which officially refuses to have a dialogue with the Russian side.

This was stated by the press secretary of the President of the Russian Federation Dmitry Peskov. “We have repeatedly said that the Russian side remains open and ready to achieve its goals through negotiations. But we also repeatedly drew everyone’s attention to the fact that at the moment we do not see such an opportunity, since Kyiv has codified – that is, turned into law – the non-continuation of any negotiations with the Russian side, ”RBC quotes Peskov.

Answering a question from journalists about information that has appeared in the Western press that Washington is privately urging Kyiv to demonstrate openness to negotiations with Moscow, the Kremlin spokesman noted that it would be inappropriate to comment on these publications at the moment. “We don’t know if this is true or not. There are also true reports. [в СМИ], but most of all posts that are absolute speculation <...>. Therefore, we do not have the opportunity to comment on this without being sure that this is really true, ”said Dmitry Peskov.

Earlier, The Washington Post, citing sources, reported that the administration of US President Joe Biden is privately urging the leadership of Ukraine to demonstrate openness to negotiations with Russia. The authors of the material explain that this is “an attempt to ensure the support of the Kyiv government by other countries,” since the refusal of Ukrainian President Volodymyr Zelensky to negotiate with Moscow has caused serious concern in several countries in Europe, Africa and Latin America due to the impact of the conflict on the economy.

Shares of the day: securities of metallurgists have become interesting for traders (October 26, 2022)

Named the most beloved Russian episodes from Soviet cinema (October 30, 2022)