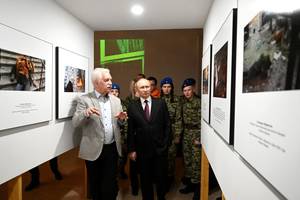 For decades after the collapse of the USSR, Ukraine has gone the way of direct, undisguised interference of Western countries in its internal affairs, Russian President Vladimir Putin said at a meeting with historians and representatives of traditional religions in Russia. He stressed that the Ukrainians were the main victims of the “deliberate sublimation of hatred towards the Russians” and a clash with the neo-Nazi regime that emerged on the territory of Ukraine was inevitable. Now, according to him, it is also bitter that one people was “played off again”, as it was after 1917.

“For decades after the collapse of the Soviet Union, Ukraine went through the path of direct, overt interference by Western countries in its internal affairs. Actually, in Russia they tried to do the same, but, unfortunately, in Ukraine they managed to instill such pseudo-values ​​into the minds of millions of people, which led to the fact that anti-Russia was created on this territory, sowing hatred, raping the minds of people, depriving their true history. Everything has been done in order to reshape the minds of millions, and the wick was very skillfully raised to the disintegration of our country, ”the press service of the Kremlin quotes Putin.

The President noted that in some Western countries of the West “for decades they have been working on this at the level of serious scientific centers with good funding.” That is why, in his opinion, Russia’s clash with the neo-Nazi regime that emerged on the territory of Ukraine was inevitable, and if in February “appropriate actions were taken on our part”, everything would have been the same, only in the worst scenario for us.

“The situation in Ukraine was brought by her so-called friends to the point where it became deadly for Russia and suicidal for the Ukrainian people themselves. And we see this even in the nature of the hostilities – it’s just amazing what is happening there: as if the Ukrainians do not exist, they are thrown into a furnace, and that’s it. It is Ukraine, the Ukrainian people, that is the first and main victim of the deliberate sublimation of hatred for the Russians, for Russia,” Putin said.

At the same time, the president noted that “in Russia, everything is exactly the opposite” – here the Ukrainian people have always been treated with respect and warmth.

Putin also drew a parallel with the events of 1941, when, despite intelligence data about the inevitability of an attack on the USSR, “the necessary defense measures were delayed and at what a heavy price the Victory over Nazism was then won.”

“Yes, now it’s also not easy, it’s difficult, it’s also bitter from the fact that they are fighting with each other, in fact, one people, in fact, the confrontation is going on within one people – just as it was after the upheavals of 1917: people again played off. Then foreign powers warmed their hands on the tragedy of our people. They did not care about both the whites and the reds, they pursued their own interests, weakened and tore historical Russia to pieces. And today, constantly supplying weapons to Ukraine, transferring mercenaries there, they are absolutely ruthless towards its citizens. At their expense, they are promoting their geopolitical goals, which have nothing to do with the interests of the Ukrainian people,” Putin stressed.

Stremousov spoke about the situation on the line of contact in the Kherson region (November 3, 2022)

The Central Bank commented on the information about the hacking of its networks by Ukrainian hackers (November 3, 2022)