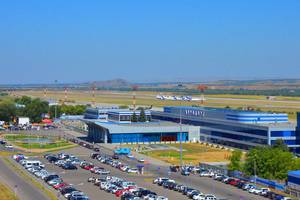 “The total passenger traffic of Mineralnye Vody Airport in January-October of this year increased by 26.5% compared to the same period last year,” Interfax quotes a representative of the press service of the air harbor.

It is specified that a high growth in passenger traffic was recorded on international flights (60.5%), on domestic routes the figure was 20.8%. The most popular foreign destinations were flights to Istanbul and Yerevan, as well as to Tashkent, Urgench, Bodrum, Almaty, Baku and Aktau.

In the nine months of 2022, the Minvod Airport served more than 3.1 million passengers, which is 28.4% more than the same period last year.

Mineralnye Vody International Airport is the largest air hub in the North Caucasus Federal District.
Since the introduction of restrictions for 11 airports in southern and central Russia at the end of February, the Federal Air Transport Agency has been recommending that airlines organize alternative routes for the transport of passengers, using, in particular, this hub.

The Ministry of Defense found a connection between the attack on ships in Sevastopol and the explosions of the Nord Streams (October 29, 2022)

Shoigu told whether conscripts will be sent to the zone of special military operation (November 1, 2022)