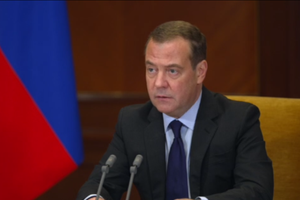 Deputy Chairman of the Security Council of the Russian Federation Dmitry Medvedev congratulated the Russians on National Unity Day in his Telegram channel and highlighted five key points on the political agenda: what are we fighting for, who is fighting against us, where are our former friends, why we have been silent for a long time and what are our weapons.

“Russia is a huge and rich country. We do not need foreign territories, we have everything in abundance. But there is our land, which is sacred to us, on which our ancestors lived and on which our people live today. And which we will not give to anyone. We protect our people. We are fighting for all our people, for our land, for our thousand-year history,” Medvedev wrote.

He also stressed that Russia is fighting against those who hate it, bans the Russian language, values ​​and faith, as well as those who “inculcate hatred for the history of our Fatherland.”

“Against us today is part of a dying world. This is a bunch of crazy Nazi drug addicts, people drugged and intimidated by them, and a large pack of barking dogs from the western kennel. With them is a motley pack of grunting gilts and narrow-minded inhabitants from the collapsed Western empire with saliva flowing down their chins from degeneration. They have no faith and ideals, except for obscene habits invented by them and standards of doublethink implanted by them, denying the morality bestowed on normal people. Therefore, having risen against them, we acquired sacred power, ”Medvedev said.

He called some of the “frightened partners” “accidental fellow travelers, clinchers and hangers-on,” also emphasizing that without all the “cowardly traitors and greedy defectors” who left Russia, “we have become stronger and cleaner.”

The deputy chairman of the Security Council of the Russian Federation believes that “we were silent for a long time,” because “we were weak and devastated by timelessness,” and now “the sticky dream and dreary haze of the last decades, into which the death of the former Fatherland plunged us, have been shaken off.” He also noted that “other countries, raped by the lords of darkness, slave owners and oppressors, were waiting for our awakening,” and expressed confidence that they, too, “will wake up soon,” and “when the rotten world order collapses, he will bury all of his arrogant priests, bloodthirsty adepts, mocking servants and dumb mankurts.

“We have the opportunity to send all enemies to the fiery hell, but this is not our task. We listen to the words of the Creator in our hearts and obey them. These words give us a sacred purpose. The goal is to stop the supreme ruler of hell, no matter what name he uses – Satan, Lucifer or Iblis. For his goal is death. Our goal is life,” Medvedev summed up.

Bermuda and Saint Helena in Russia recognized as unfriendly (October 30, 2022)

A bird on the loose is how Elon Musk described the completion of the deal to buy Twitter (October 28, 2022)

Muscovites warned about snow and ice