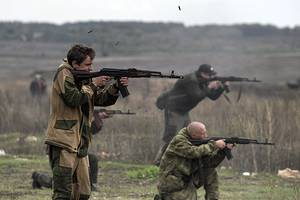 The veteran of the special forces of the Ministry of Internal Affairs Alexander Arutyunov, known online as Razvedos, on one of his live broadcasts clearly explained the secret of the success of the Wagner PMC as part of a special military operation and stated the crisis of infantry in the Armed Forces of the Russian Federation.

During his live broadcast on the Vkontakte social network, Arutyunov touched on the role of infantry in offensive operations.

“Artillery decides, aviation decides, tanks decide – these are all the components that decide, but the infantryman with a machine gun decides in the end no less than they do. And today we have – attention – not an aviation crisis, not an artillery crisis, and not a crisis of tankers, we have an infantry crisis today, ”the military expert believes.

In his opinion, the only infantry that decides is Wagner PMC.

According to a veteran of the special forces of the Ministry of Internal Affairs, there are currently no combat-ready infantry units in the Armed Forces of the Russian Federation.

“She either died in battle, or plays a role that is not capable of anything. And only PMCs go forward [«Вагнер»]. And, believe me, voicing this, I do not feel joy, I am stating a fact: today there is infantry only in Wagners, there is no infantry anywhere else. When I talk about infantry, I’m not talking about defensive stability, I’m talking about successful offensive assault operations. That is, the capture of settlements, the capture of strongholds, ”Arutyunov explained.

Currently, Wagner PMC operates in the Bakhmut direction, holding the front from Nikolevka-2 in the DPR to the Lisichansk agglomeration in the LPR. The Wagnerites manage not only to hold their positions during the ongoing counterattacks of the Armed Forces of Ukraine, but also to successfully advance in different areas.

The Ministry of Defense presented operational data on the progress of the special operation (November 4, 2022)

The Ministry of Finance exceeded the quarterly OFZ placement plan by 2.6 times (November 2, 2022)