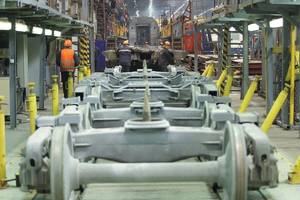 The Demikhov Machine-Building Plant (DMZ), which is part of JSC Transmashholding (TMH), has begun manufacturing a new electric train of the EP2DM model, which provides for the maximum domestic component base. More than 80 enterprises from Russian regions are involved in this process.

The design of the latest electric train was developed in cooperation with the National Center for Industrial Design and Innovation “2050.LAB” in accordance with modern trends that have developed in the field of industrial design, as well as taking into account the wishes of passengers and carrier companies.

The main changes affected the exterior and interior solutions of the train, the main stylistic decisions were redesigned, including the shape of the mask of the head car. The driver’s cab has an aerodynamic shape and excludes unauthorized access by unauthorized persons to the frontal part and the roof of the train.

According to the results of passenger surveys, the ergonomics of the sofas have been improved, due to which additional space is provided for oncoming landing. The possibility of passing passengers with disabilities, as well as in the serial EP2D, a rather deeply modernized version of which is EP2DM, is provided in the head car.

In electric trains of the new modification, an intelligent video surveillance system with the function of tracking the dynamics of passenger traffic will be installed. Information about the train route, temperature conditions and other information will be displayed on LCD monitors in the cabin.

From a technical point of view, the key feature of the rolling stock of the new electric train will be a set of electrical equipment developed by TMH, designed according to the principle of a modular design to ensure maximum maintainability of the unit.

The head of Rosneft announced that BP continues to be a shadow shareholder of the company (October 27, 2022)

Moscow will lease land at preferential rates to 32 companies with the status of industrial complexes and technoparks – Efimov (November 7, 2022)

The scientist warned about the transition to global cooling in Russia (November 26, 2022)