National Unity Day, celebrated on November 4 in Russia, dates back to the oldest historical date after the Nativity of Christ. This year this date is 410 years old. Recall the history of the holiday.

As a result of military intervention, taking advantage of the crisis of power during the Time of Troubles, Poles ended up in Russia, in Moscow. Nizhny Novgorod zemstvo headman Kuzma Minin organized a people’s militia numbering 10 thousand people – Cossacks, peasants, local service people, archers and nobles. The militia, in addition to the Russians, included the Mari, Chuvash, Komi and other peoples of Russia. It was headed by Prince Dmitry Pozharsky. Warriors of the people’s militia, regardless of class, religion and ethnic origin, were able to organize themselves and repulse the enemy.

Hieromartyr Hermogenes, Patriarch of Moscow, called for a war of liberation against the Polish-Lithuanian occupiers, despite threats. In response to the attempts of the Poles to force him to order the Russian troops to withdraw from Moscow, he was adamant: “Why are you threatening me? I’m afraid of one God. If all of you, Lithuanian people, leave the Muscovite state, I will bless the Russian militia to go from Moscow, but if you stay here, I bless everyone to stand against you and die for the Orthodox faith, ”the Patriarch replied with a categorical refusal to the offer to surrender to the interventionists. He was imprisoned in the Miracle Monastery in the Kremlin, where his glorious earthly journey ended.

On October 22 (November 4), 1612, the people’s militia stormed Kitay-Gorod, into which Prince Pozharsky entered with the Kazan Icon of the Mother of God. Two days later, the Kremlin was taken, where then solemnly, with the Procession of the Cross, the Russian squads entered on October 25, carrying the miraculous icon.

Next year, the era of the Time of Troubles will end in Russia: at the Zemsky Sobor, representatives of all the estates of the country (merchants, nobility, boyars, clergy, Cossacks, archers, delegates from Russian cities) will elect Mikhail Fedorovich Romanov to the kingdom.

Since 1649, Tsar Alexei Mikhailovich ordered to celebrate the Feast of the Kazan Icon of the Mother of God not only in summer, but also on October 22 (according to the Julian calendar), as it had already been celebrated in Moscow since the time of the Troubles. And Prince Pozharsky, using his own money, in memory of the victory over the Poles in honor of the Kazan Icon of the Mother of God, built the Kazan Cathedral in 1613 on the edge of Red Square and Nikolskaya Street. Since 1818, the memory of Minin and Pozharsky has been immortalized by the most famous monument on Red Square, where they now look at the Victory parades taking place on May 9.

In the Soviet years, November 4 was not even celebrated as a secular holiday; three days later, the main holiday of that period was located in memory of the 1917 revolution. In 1996, November 7 was officially celebrated as the Day of Accord and Reconciliation, implying agreement between the left and right political forces, both in history and, above all, in the “turbulent 90s” themselves.

In 2004, the Interreligious Council proposed making November 4 a holiday and calling it National Unity Day, which was supported by the State Duma. On December 29, the holiday date was approved by law. The name was proposed in memory of the heroism and unity of the militia soldiers of different origins, social status and religion in the fight against the enemy. It also absorbed the meanings laid down on the holiday of harmony and reconciliation, while becoming instead of it a day off. And since 2005, the Day of National Unity has been celebrated in Russia.

Most of the holidays we celebrate, which have the status of a day off, are new by historical standards, having appeared in the 20th or already 21st century. The holiday on November 4 combined history and modernity (and not only the history of the 17th century, as we recall below). 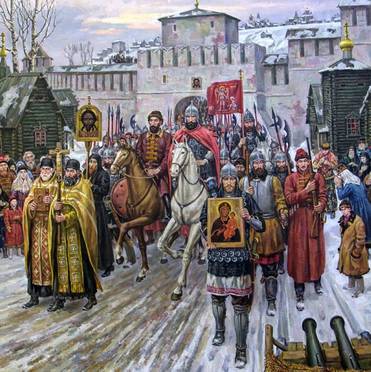 Viktor Malinovsky. “Exit of the Nizhny Novgorod militia in 1612”

During the celebration of National Unity Day, flowers are laid at the monument to Minin and Pozharsky. On this day, the President of Russia makes solemn addresses and presents state awards.

Popularization of the holiday began in 2007 with the release of Vladimir Khotinenko’s feature film “1612”. Only in Moscow, 39 cultural and educational mass events were held, and in the Nizhny Novgorod Kremlin, a historical reconstruction of the battle between “militias” and “invaders” took place. A year later, Nashi activists gathered 10,000 young people on Vasilyevsky Spusk, where a “Peace Blanket” was sewn from patchwork. Also in 2008, a free rock festival “Call” was held, aimed at combating negative manifestations in the youth environment and giving up drugs. “This is a call for love and mutual understanding, for peace, for the rejection of injustice in all its manifestations,” the press service of the Northern Administrative District of Moscow, where the festival was held, said in a statement.

In 2009, in Moscow on November 4-8, in honor of the feast of the Kazan Icon of the Mother of God, the VIII church-public exhibition-forum “Orthodox Rus’ – to the Day of National Unity” was held. A year later, Patriarch Kirill lit up the restored icon of St. Nicholas of Mozhaysky on the St. Nicholas Tower of the Moscow Kremlin that day.

In 2011, the Central Exhibition Hall “Manezh” hosted the 10th anniversary exhibition-forum “Orthodox Rus’ – to the Day of National Unity”. In 2012, these days the premiere of the film “August. Eighth” about the military conflict in South Ossetia (2008). The festival “Energy of Unity” was held on Bolotnaya Square with performances by dancers and extreme sportsmen.

In 2013, at the exhibition of the multimedia historical and cultural park “Russia – My History”, the exhibition “Romanovs” was held in the year of the 400th anniversary of the beginning of the reign of the Romanov dynasty. The 2014 celebrations coincided with the March annexation of Crimea to Russia. They were attended not only by members of United Russia and trade unions, but also by the Communist Party of the Russian Federation, the Liberal Democratic Party and Just Russia with their leaders Gennady Zyuganov, Vladimir Zhirinovsky and Sergei Mironov. On the same days, the premiere of Nikita Mikhalkov’s film based on the works of Ivan Bunin “Sunstroke” about the first years after the October Revolution in Russia took place.

The celebrations of 2015 were remembered for the rally-concert “We are united”, organized by the Civic Chamber of the Russian Federation, where 80 thousand people took part. But not only in Moscow, festivities took place – they were also held in Omsk, Novosibirsk, Sevastopol, Vladivostok and other large cities of the country. And a year later, a monument to Vladimir the Great, who went down in history as the baptizer of Rus’, was opened on Borovitskaya Square in Moscow. In 2017, the center of celebrations fell on the Luzhniki sports complex, where the rally-concert “Russia” unites.

2018 and 2019, in the context of the celebration of National Unity Day, were marked by educational projects. The multimedia exhibition “Russia – My History” appeared in Krasnodar, and in 2019, the First Channel premiered the documentary film “Rurikovich” about the dynasty, the end of which began the Time of Troubles.

The traditions of the holiday did not disappear even in the difficult year of 2020 during the COVID-19 pandemic — the opening of the Museum of Archeology of the Chudov Monastery took place in the Kremlin. The monastery itself was destroyed and demolished in 1929-1932, and in its place until 2016 was the 14th building of the Kremlin.

2021 was the year of the open all-Russian online lesson “Big Family – Russia”, where guests and presenters introduced young viewers to the culture and traditions of the peoples of Russia. Nizhny Novgorod, which was celebrating its 800th anniversary, hosted a show of drones that created 3D pictures in the sky. VTGRK hosted a 16-hour air-marathon “Glory to the Fatherland!” on the “Looking” online platform, which told about the culture and history of Russia.

National Unity Day in 2021 coincided with the 300th anniversary of the creation of the Russian Empire. In 1721, on October 22 (November 2), Peter I became Emperor of All Russia, and so, against the backdrop of victories in the Northern War, a new period in Russian history began. And on November 3-7, in many regions of Russia, the “Great Ethnographic Dictation” (an annual cultural and educational event organized by the Federal Agency for Nationalities Affairs) took place.

There will also be many events designed for the youth audience. Rospatriottsentr will hold a quiz game “Russia is our common home”, where the participating teams will have to answer questions related to the history and culture of their native country. Established on July 20, 2022, the Russian Movement of Children and Youth, together with VK Clips, organizes the Know Your Country project, where participants post a video on the VKontakte social network against the background of a famous object in their city (without naming it) and invite viewers to guess what this is for the object, based on several facts. The Ministry of Education will launch the “Together – the whole country” campaign, where participants are invited to post photos and videos on social media pages and talk about their achievements. According to the organizers, “it is your achievements that are the achievements of Russia.” The “Big Break” competition for schoolchildren will hold a “Marathon of Cultures”, where participants are invited to talk about the culture and traditions of the region in which they live. Participants are also invited to wear national costumes and share recipes for dishes popular in their regions.

The celebration of the Day of National Unity in 2022 is notable for the annexation of new regions to Russia – the Kherson and Zaporozhye regions, as well as the Donetsk and Luhansk people’s republics (DNR and LNR, respectively). On November 3, at 12:00, the All-Russian open lesson was held, organized by the Institute for the Study of Childhood, Family and Education of the Russian Academy of Education (RAO). At it, military historian Vladimir Kiknadze told schoolchildren about the importance of joining the liberated territories into Russia and understanding the historical experience of unity in the realities of today.

At first, incomprehensible to many, because we do not know our history enough, the holiday on November 4 from this non-peaceful year begins to be perceived in a new way, it becomes relevant. The significance of the holiday of national unity will be comprehended further, because on this day one of the brightest examples of the self-organization of the people of Russia against external hostile forces and for the sake of unity and the future of the country took place.

Peskov said that Putin’s speech at Valdai will need to be “studyed, read and re-read” (October 27, 2022)

Income tax increase for LNG exporters to 34% will not affect new projects (November 9, 2022)