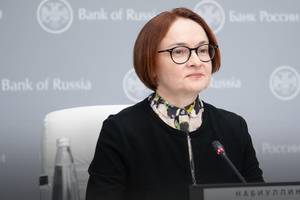 The Bank of Russia improved its forecast for GDP for the current year, estimating the contraction of the Russian economy at 3–3.5%. Next year, the GDP growth rate is also expected to be negative, with a reduction of 1-4%. At the same time, according to the head of the Central Bank Elvira Nabiullina, the lowest point of the decline in gross domestic product will be in mid-2023, the Russian economy will move to growth in the second half of the year. In 2024-2025, according to the forecast of the Central Bank, GDP will grow by 1.5-2.5% annually.

“Recovery economic growth next year will start a little later than we expected in July. The lower point of decline will be in the middle of next year. Demand from the public sector will continue to support economic activity. The forecast for GDP for the next year was left unchanged – a reduction of 1-4%, in the fourth quarter the dynamics will become positive, ”Nabiullina said at a press conference following the meeting of the Board of Directors.

She also noted that in the updated forecast of the Central Bank, the prices for Urals oil in 2023-2025 did not change: 70, 60 and 55 US dollars per barrel, respectively. At the same time, forecasts for both exports and imports were slightly raised. The current account surplus forecast for this year has been revised upwards by $10 billion to $253 billion.

The US shale revolution is officially over (November 25, 2022)

Shares of the day: “preferred shares” of Tatneft are growing after the report (November 2, 2022)

Trophies from the NWO zone were shown for the first time in Russia (November 5, 2022)