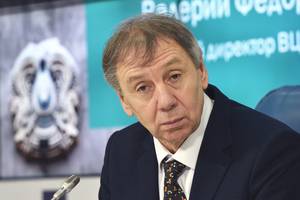 The world continues to hotly discuss the possible use of the so-called “dirty bomb” on the territory of Ukraine. At the same time, opponents accuse their friend of possibly using this terrible weapon, bringing their defense with more and more new arguments.

The well-known Russian political scientist, director of the Institute for Political Studies, Sergei Markov, expressed his point of view on this issue. In his opinion, the fears about the use of the “dirty bomb” by the Armed Forces of Ukraine are absolutely real, but our country was able to figure it all out and managed to take the necessary measures, the Public News Service reports.

“The scenario was like this – after such a strike, they strike their blow with non-nuclear forces at the Russian Armed Forces, at the naval base in Sevastopol, expel us from the UN Security Council, make a Security Council decision on comprehensive sanctions, which India, Turkey and others will have to join. countries, and also close the sky over Ukraine,” Markov said.

All this, in his opinion, would be done in order for the Armed Forces of Ukraine to go on the offensive and seize Crimea, Donbass, Lugansk and Kherson. But Russia never used tactical nuclear weapons, outplaying the Americans for the first time.

“Then they decided to use the dirty bomb themselves. The scenario was planned as follows. First, Ukraine will throw a “dirty bomb”, in “response” the Americans will strike with the help of tactical nuclear weapons. It is unlikely that it will be possible to accurately recognize who exactly used the charge with tactical nuclear weapons. Further, accusations are made against Moscow and an attack is launched on the RF Armed Forces in all directions, ”the political scientist explained.

He recalled that Russian President Vladimir Putin told Defense Minister Sergei Shoigu about these plans of the United States. He, in turn, started ring up colleagues from different countries.

“And the international community really got scared and started calling Biden in turn. After such pressure, Washington backed down,” Markov summed up, adding that Moscow completely outplayed Washington in this situation.

The Ministry of Defense reported operational data on the progress of the special operation in Ukraine (October 28, 2022)