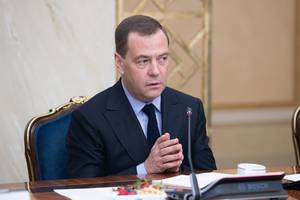 According to him, for this, the authorities must recognize the demands of the Russian Federation as part of a special military special operation, RIA Novosti reports.

But everything else, including the purchase by the Kyiv regime of electricity in Slovakia, will only lead to a further increase in energy prices for both Europeans and Ukrainians, but will not give the desired stability in the operation of the Ukrainian energy system, Medvedev warned.

“The path to energy supply stability is different. We must recognize the legitimacy of Russia’s demands within the framework of a special military operation and its results, reflected in our Constitution. And then with the light, everything in Ukraine will get better, ”summed up the deputy chairman of the Security Council of the Russian Federation.

Earlier it became known that Kyiv carried out the first test purchase of electricity from Bratislava.

“We are able to pay a communal apartment”: Primakov responded to critics of heating houses in Europe (October 29, 2022)

Shares of gold miners are in demand again (November 9, 2022)