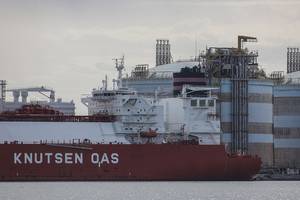 “One LNG tanker heats a million Europeans for a month,” Cheniere, the largest exporter of liquefied natural gas (LNG) to the United States, likes to say. The company built a $17 billion terminal in the Texas city of Corpus Christi, and in October pompously announced an $8 billion expansion project. By the way, Cheniere has an even bigger LNG terminal in Louisiana.

Europe, meanwhile, has abandoned cheap Russian gas and is feverishly trying to replace it. The lion’s share of the “blue” fuel that is now supplied to the Old World is LNG. Mainly from the USA. The main supplier of American LNG to Europe is Cheniere. Hence the promotional stories of millions of Europeans warming themselves for a month thanks to Cheniere’s American LNG.

According to the Energy Information Administration (EIA) of the United States, in the first half of 2022, US LNG exports grew by 12% year-on-year, which, after returning it to a gaseous state, is equivalent to 57 billion m³. Nearly two-thirds of LNG from the US goes to Europe this year. That’s double what it was last year, when about a third of US gas exports went to Europeans.

The US has surpassed Qatar and Australia to become the world’s largest LNG exporter. Under an agreement signed in March, America will supply the European Union with an additional 50 bcm over the course of this decade. The London Telegraph this week reported on an agreement between the US and the UK on large LNG supplies.

The American gas workers have Napoleonic plans. Thus, according to Toby Rice, the head of the largest US gas producing company EQT, America must increase gas exports by 4 times and bring it to 1.6 billion m³ per day by 2030. This gas, he believes, will also help solve the energy crisis and lead the transition from fossil fuels to renewable energy sources, in which gas is assigned the role of a temporary replacement for coal and oil.

Will America, on top of everything else, be able to become a world gas superpower as well? At least she has more than enough gas for this. According to the EIA, proven reserves will last another century. And this is without taking into account shale gas, the largest deposits of which are located in the Appalachians. Moreover, in one of them – Marcellus, there is more gas than in the ten largest natural gas fields taken together.

Approximately half of the LNG projects due by 2030 are currently located in the US. In favor of America’s leadership and the fact that their gas industry is now among the leaders in innovation. In general, the potential of the American gas industry is great. However, for the US to become a gas superpower, it must overcome three major hurdles.

The first is Wall Street. American banks do not want to increase gas production. The past decade (2011-2020) of the shale revolution has cost investors and shareholders over $150 billion. Now they are demanding that gas companies invest not in expanding production, but pay high dividends.

The heads of gas companies have to listen to the requests and demands of investors and shareholders. Thus, the large oil shale company Pioneer Natural Resources intends to increase its dividend yield by 9 (!) times this year: from last year’s 1.4% to 12.4%. Another shale giant, Chesapeake Energy, has doubled its share buyback program. In addition, the oil shale companies paid off debts in the amount of $26 billion.

Of course, if gas prices remain high, then one day the desire to increase production in order to earn more from expensive gas may be stronger than the newly acquired financial discipline. But even in this case, gas companies will have to solve the second major problem – to deliver the gas extracted from the bowels to LNG plants for liquefaction. According to S&P Global analyst Matt Palmer, the US could double its gas exports by the end of the decade with the existing gas pipeline system. However, new gas pipelines will be required to increase exports more. Meanwhile, environmentalists are fighting furiously with the construction of gas pipelines and are often victorious.

The third major obstacle to America’s transformation into a gas superpower is, oddly enough, Europe, which is extremely interested in American LNG. The point is that LNG projects cost billions and are financially risky. Bankers are ready to finance them only if the borrowers provide guarantees that they will get their money back. Guarantees are long-term contracts for the supply of gas that will go through gas pipelines under construction. Buyers from Japan and South Korea are happy to sign long-term contracts with American gas companies, but Asia alone, with all its huge demand, is still not enough to financially justify the construction of very expensive gas pipelines and LNG plants.

The Europeans could calmly solve this problem, but they are extremely reluctant, and, even now, signing long-term contracts for gas supplies. Europe in the truest sense of the word is fixated on a “green” transition, i. replacing fossil fuels with renewable energy sources. Until February 24, their plans in this regard were also enormous. If they are implemented, and in Brussels they were sure about this just a year ago, then Europe will simply not need gas in 10-20 years (the duration of long-term contracts). Hence the European passion for short-term contracts.

Despite Europe’s urgent need for gas this year, only 4 European energy companies have signed long-term contracts with American gas companies so far.

“No one in the EU knows what Europe’s demand for gas will be after 2030,” energy expert David Goldwyn explains the problem.

In general, theoretically, the United States can save Europe from gas starvation, but this requires a lot of work. Moreover, not only to American gas workers, but also to Europeans, the Economist concludes.