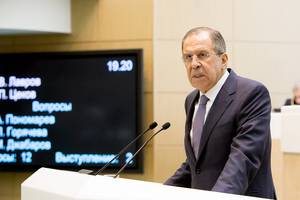 Russian Foreign Minister Sergei Lavrov explained why no one will be able to undermine the Russian economy in Russia. In his opinion, this is impossible, since the Russian Federation is following its own course, despite all the difficulties.

“It can be said with confidence that no one will ever be able to stop the Russian economy and undermine domestic political stability in the country,” Lavrov said in a speech read at the World Thematic Conference of Russian Compatriots Living Abroad.

At the same time, the head of the Foreign Ministry drew attention to the fact that Russia, under the conditions of strong sanctions, is actively developing relations with the states of the CIS, Asia, the Middle East, Africa and Latin America.

“We do not fence ourselves off, including from partners in Europe and North America. The Russian authorities have never chosen to break the established mutually beneficial ties, the speaker explained. At the same time, Russians abroad are faced with “cave” Russophobia and even racism. But this did not prevent them, but, on the contrary, led to unity and solidarity,” Lavrov summed up.

As before wrote “Expert”, head of the Russian government Mikhail Mishustin, speaking at the plenary session of the II Caspian Economic Forum, said that the domestic economy would soon return to growth. According to the Prime Minister, the Russian authorities expect that this will happen in a little more than a year, and in 2024-2025 the Russian GDP will continue to grow.

Red Wings Airlines increased the range of SSJ100 flights by one and a half times (November 25, 2022)

Power supply disrupted as a result of sabotage was partially restored in the Kherson region (November 7, 2022)