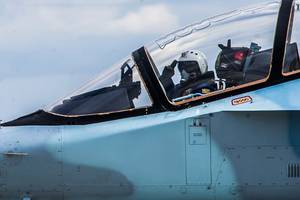 Over the past day, Russian servicemen repelled attacks in the Kupyansk and Krasno-Limansk directions, and during the offensive in the South-Donetsk direction they advanced more than three kilometers into the depth of the enemy’s defenses, Lieutenant-General Igor Konashenkov, spokesman for the Russian Defense Ministry, said.

“In the Kupyansky direction, the enemy, with forces of up to two battalion tactical groups, reinforced by foreign mercenaries, launched seven unsuccessful attacks on the positions of Russian troops in the areas of the settlements of Pershotravneve, Orlyanka, Tabaevka and Berestovoe in the Kharkov region. Artillery fire, air strikes and active actions of the Russian troops drove the units of the Armed Forces of Ukraine back to their original lines. Up to 250 Ukrainian servicemen and militants, one tank, six infantry fighting vehicles, four armored personnel carriers and eight vehicles were destroyed,” Konashenkov said.

In the Krasno-Limansky direction, according to him, it was possible to repel the offensive of two enemy companies in the area of ​​Stelmakhovka, Makeevka and Chervonopopovka of the LPR. More than 50 Ukrainian servicemen, one tank, two infantry fighting vehicles and one armored personnel carrier were destroyed by artillery fire and army aviation strikes.

In the South-Donetsk direction, Russian units captured a number of strongholds and dominant heights, advanced more than three kilometers into the depth of the enemy’s defenses and reached the southern outskirts of the settlement of Pavlovka in the DPR. At the same time, more than 100 Ukrainian servicemen, one tank, three armored combat vehicles and six pickup trucks were destroyed. In addition, as Konashenkov clarified, one Ukrainian tank was captured, six servicemen of the Armed Forces of Ukraine surrendered.

Three attacks of the Armed Forces of Ukraine in the direction of the settlements of Pyatikhatki, Chervony Yar and Ishchenka of the Kherson region were repelled in the Nikolaev-Krivoy Rog direction. The enemy was thrown back to the starting lines, while losing more than 180 military personnel, 11 armored combat vehicles and 21 vehicles.

Also, Russian troops destroyed an artillery battery of American M777 howitzers, two launchers of the American HIMARS MLRS, one of the German MARS-2 MLRS, a missile and artillery weapons depot and an American AN / TPQ-37 counter-battery radar.

The representative of the Ministry of Defense also drew attention to the ongoing provocations in the area of ​​the Zaporozhye nuclear power plant.

“During the day, three shelling by artillery units of the Armed Forces of Ukraine of the city of Energodar and the territory adjacent to the station was recorded. A total of 10 rounds were fired. Shelling by Ukrainian artillery was carried out from the area of ​​​​the settlement of Novokievka, Dnepropetrovsk region. During the counter-battery fight, units of the Armed Forces of Ukraine were suppressed by the return fire of Russian artillery, ”Konashenkov said.

In addition, according to him, while trying to land a sabotage and reconnaissance group of the Armed Forces of Ukraine to penetrate the city of Energodar, the Russian military destroyed a Ukrainian high-speed boat.

The share of non-residents in sovereign Eurobonds of the Russian Federation fell to a three-year low (November 10, 2022)