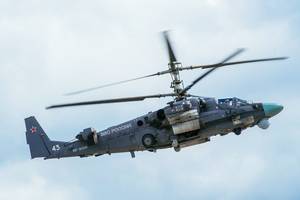 Russian pilots performing tasks within the framework of the SVO use their combat vehicles to the limit of their capabilities. So, when launching missiles, the crews of Ka-52 reconnaissance and attack helicopters maintain a pitch-up angle of 40-45 degrees, twice the technical specifications laid down in the design of the Alligators. This is reported by TASS with reference to a source in the military department.

“Now in the special operation, helicopters fly at low altitudes and at those speeds at which it is possible to fly over the terrain,” the agency quoted an unnamed interlocutor as saying. “Usually the Ka-52’s pitch angle is 20 degrees, and pilots are now launching missiles from a pitch angle of 40-45 degrees,” he said. As follows from the words of the representative of the Ministry of Defense, at the same time, combat rotorcraft are successfully coping with the tasks assigned to them.

Let us clarify that a pitch-up is a flight of an airplane or helicopter with a climb and a nose raised above the horizon. Launches of unguided aircraft missiles carried out from such a position make it possible to reduce the time of a combat flight, reducing the possibility of detecting helicopters by an enemy air defense system, and also increase the radius of fire damage to targets.

Konashenkov announced the successes of the Russian military in the main directions of the Northern Military District (November 5, 2022)