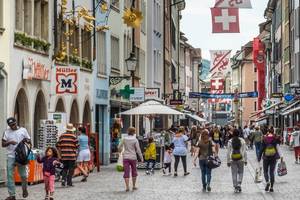 Thus, the Swiss faced the biggest loss of real wages since 1942, UBS notes.

In 2022, in order to compensate for the loss of purchasing power, Swiss unions demanded a wage increase of 3-5%. However, due to slower growth, the country is likely to avoid an inflationary spiral, when rising prices lead to higher wages, and their increase, in turn, stimulates higher inflation.

“A salary increase of just over 2%, well below the current rate of inflation, is unlikely to put employees in a festive mood,” Daniel Kalt, chief economist at UBS Switzerland, told Bloomberg. “This, however, assumes that there is no wage-price spiral that could drive inflation further.”

The pace of consumer price growth in the country remains above the target of the Swiss National Bank for the ninth month in a row. Its president, Thomas Jordan, has repeatedly hinted at a further increase in interest rates. Nevertheless, inflation in Switzerland is much lower than in most neighboring EU countries, the UK or the US.

Prices for buckwheat and sugar fell in Russia (November 9, 2022)

Japanese tire manufacturer Bridgestone has started looking for a buyer for its Russian assets (October 31, 2022)