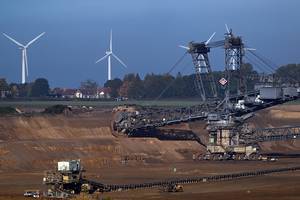 Despite the statements of European and world leaders (UN Secretary General António Guterres, for example, called for tripling investments in the development of renewable energy sources), there are more and more examples in the Old World that all the buzzwords of the European Union about commitment to a “green” transition, i.e. to replace fossil fuels with renewable energy sources, remain words, but nothing changes in reality. In their defense, European officials, of course, can say that the energy crisis has made serious adjustments to the plans of governments for the transition to “clean” energy, which made us remember, for example, coal, which Europeans began to gradually forget about.

You don’t have to look far for examples of fossil fuel phase-out being at least indefinitely delayed. Oil Price, for example, announced the start of disassembly of the first wind turbine at a wind farm in western Germany. There, the dismantling of a large wind farm began, on the site of which it was decided to extract not wind energy, but lignite, a widespread type of brown coal. The fact is that the farm is located almost on the territory of the discovered Garzweiler lignite deposit, the largest, by the way, in Germany (reserves are estimated at 1.3 billion tons), which is being developed by the energy giant RWE. The field is located near Düsseldorf and has been developed for more than a hundred years.

RWE, by the way, at the end of September, clearly announced for a reason that its three closed coal-fired power plants with a capacity of 300 MW each, operating just on lignite, are resuming electricity production and returning to the electric market.

RWE is resuming production at the Harzweiler field after a court in North Rhine-Westphalia ruled in its favor in March this year in a land dispute and allowed it to expand the field.

“We understand that the situation looks paradoxical,” agreed RWE spokesman Guido Steffan, “but this is the reality.”

The paradox of the situation lies in the fact that Berlin at all summits and pan-European meetings tirelessly continues to declare its commitment to “clean” energy and the imminent rejection of hydrocarbons, coal and nuclear energy? Incidentally, as far as nuclear energy is concerned, the government has decided not to shut down, as planned, the three remaining nuclear power plants until at least April.

The North Rhine-Westphalia Ministry of Economy and Energy said this week that it is trying to convince RWE not to touch the wind farm. Judging by the way events are unfolding, all efforts to save the wind farm have proved futile.

A representative office of the migration center of Moscow was opened in Tajikistan (November 9, 2022)

Shares of the day: securities of metallurgists have become interesting for traders (October 26, 2022)