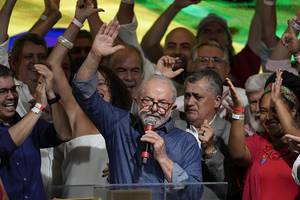 Lula da Silva won the second round of the presidential election with a score of 50.9%, ahead of the current head of state, Jair Bolsonaro, by only 1.8% (the latter won 49.10% of the vote). For Lula, this will be the third term in a row in the presidency, which he successfully held from 2003 to 2010. Later, in 2017, he was sentenced to 9.5 years in prison on charges of accepting a bribe in the form of an apartment, but in 2021 he was released and almost immediately announced his readiness to fight for the presidency.

In the past, the head of the union and ordinary worker Lula was one of the most popular leaders in the history of modern Brazil. The growth of the economy, the expansion of social programs made him a favorite of citizens. It can be said that he brought Brazil to the international arena in the 21st century. At the end of his second presidential term, Lula’s personal rating reached 87%, and his government’s – 77%. Even during the period of corruption scandals, the popularity of the politician was undeniable.

However, as time goes by, priorities change. The Brazilian electoral season of 2022 is proof of this. If the gap between Lula and his rivals in the presidential elections in 2002 and 2006 averaged 22%, but now it has fallen to the minimum values. Also, despite the fact that the left managed to regain the presidency, they did not succeed in Congress: both chambers are controlled by Bolsonaro’s allies. In addition, the right has achieved significant victories at the governor level: 60% of Brazil’s territory will be controlled by them. An interesting fact is that the south-east of the country, the richest states, this time supported Bolsonaro, although they were traditionally considered the patrimony of Lula. Too sluggish for Left Turn 2.0 (the term Left Turn is used by experts to explain the string of political changes in Latin America in the early 2000s that brought the left to power). Lula’s victory could well be called Pyrrhic, although most rating agencies guaranteed him a Triumph.

Da Silva was unable to consolidate his “multi-layered” electorate, which consisted not only of workers and the poor, but also of small and medium-sized businesses. One could even say that Lula won not because of his, of course, high popularity, but because of Bolsonaro’s mistakes. Corruption scandals, failure in the fight against coronavirus (Brazil is in 5th place in the number of deaths as a result of COVID-19 disease. In addition, Bolsonaro was accused of misinforming the population about the dangers of the virus and methods of personal protection) – all this negatively affected Bolsonaro’s rating , which has been below 50% for most of his presidency – not for nothing is he called the “Trump of the Tropics.”

However, the Brazilian counterpart has not lagged one iota behind the American original and has been consistently warning about the inefficiency of electronic voting since the beginning of last year. Bolsonaro’s social networks are still silent, but he can be expected to try to challenge the results of the presidential election.

On the domestic political front, Lula will have to face near-constant resistance from the right. A wave of socialist initiatives should not be expected. The country must be brought out of the economic crisis, and for this it will be necessary to cooperate with the opposition. Accordingly, both sides will have to make concessions to each other. In addition, a strong political polarization persists in society, which deprives the future president of the opportunity to carry out radical reforms.

The foreign policy direction will remain approximately the same as under Bolsonaro, but with some changes. For example, relations with the United States will be more constructive (D. Biden was one of the first to congratulate Lulu on her victory). Lula will actively work to strengthen regional integration, primarily economic, which was almost completely ignored by Bolsonaro. This is especially true now, when the leftists (Chile, Mexico, Argentina, Peru, Bolivia, Colombia) have begun to come to power in Latin American countries again. Relations with China and Russia will develop both within the framework of BRICS and at the bilateral level. Thus, in an interview with Time magazine in May 2022, Lula placed some of the responsibility for the Ukrainian crisis on the United States, NATO and the EU. However, he will still develop cooperation with Moscow more restrained than in the first two terms of his presidency in view of the threat of secondary sanctions. As for global issues, the climate agenda will once again return to the foreign policy “clip” of Brazil, it occupied an important place in Lula’s election program.

In Belarus, they said that they see no threats to the formation of offensive groups on the border (October 26, 2022)

Gazprom decided not to reduce transit through the Sudzha GIS to Moldova (November 28, 2022)