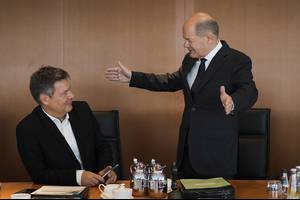 The German economy certainly surprised not only economists, but also the Germans themselves, who read every day in the newspapers about the closure of enterprises and the transfer of business by companies to other countries where the situation is better. Despite high inflation and the energy crisis, which, due to the heavy dependence on Russian gas in the recent past, is especially acute in Germany, it showed an unexpected increase in the third quarter. Of course, Germany’s GDP growth compared to the second quarter is purely symbolic – according to the German Federal Statistical Office, only 0.3%, but the vast majority of economists predicted a decline. Economists polled by Reuters, for example, believed that in July-September Germany would experience a decline of 0.2%.

“The German economy continues to hold its ground despite difficult economic conditions amid the ongoing coronavirus pandemic, broken supply chains, rising prices and the war in Ukraine,” the German Federal Statistical Office said in a statement.

In this quarter, the first economy in Europe not only grew slightly, but even surpassed the results of the previous quarter: in March-June, it grew by 0.1% in quarterly terms.

If compared in annual terms, GDP growth in the third quarter was 1.2% compared to July-September 2021.

It seems that the German economy surprised even the federal government of Germany. In Berlin, the state of the economy is viewed without much optimism. Government officials predict a recession and a 0.4% decline in GDP in 2023.

Shares of the day: X5 Group stocks in positive territory against the backdrop of a takeover deal (November 3, 2022)

Shipment of Russian wheat for export in October increased by almost one and a half times (October 31, 2022)