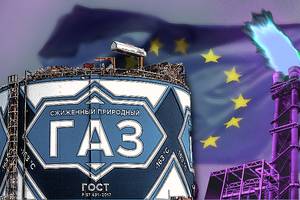 Natural gas has risen in price by $2.28 per barrel, or 61.1%, since the beginning of 2022. Such data is provided by Trading Economics. Now, against the backdrop of a fairly warm beginning of the autumn-winter period in Europe, fuel has fallen in price.

By the end of October, there are about 102 billion cubic meters of gas in underground gas storage facilities in Europe, that is, storage facilities are approximately 95% occupied. At the same time, about 30 tankers with liquefied natural gas are standing off the coast of Spain and Portugal – they cannot be unloaded, because the LNG terminals are packed to capacity.

The International Energy Agency was quick to say that “the skyrocketing demand for natural gas is coming to an end” and the energy crisis in Europe is pushing governments to adopt clean energy policies.

Natural gas, for which demand was previously expected to continue to grow, could now join coal and oil and peak around 2030, according to the latest IEA estimates.

However, 2023 is quite far away, and gas is needed now. As the head of Novatek, Leonid Mikhelson, said at a briefing at the Verona Eurasian Economic Forum, the introduction of a gas price ceiling in Europe will only exacerbate the energy crisis, all producers and at least 30-40% of consumers think the same.

In the meantime, gas prices in Europe on a TTF basis dropped to $1,160 per 1,000 cubic meters last week on the back of unusually warm weather and high storage occupancy, Oksana Lukicheva, commodity markets analyst at Otkritie Investments, said. UGS occupancy in Europe as of October 29 was 94.34%, almost reaching the target level of 95%. The current fall in gas prices led to an increase in electricity generation from gas by 33% m/m in Germany and by 44% m/m in the Netherlands. Despite the current situation, the risks of gas shortages during periods of peak consumption still remain.

In the US, the cost of gas in Henry Hub (CME futures) rose to $5.684/mmbtu ($203 per 1,000 cubic meters) last week. Natural gas reserves in US UGS facilities, according to the US Department of Energy, as of October 21 remained 4.0% lower than last year and 5.5% lower than the level over the past five years.

Uncertainty about the risks associated with shipping coal to the US continues to support prices as gas demand could rise sharply as a result of a railroad strike. At the same time, the analyst believes, the market will still tend to decline in 2023 due to a significant increase in production. The balance of the US natural gas market will be less overweight in November due to colder weather, and Freeport LNG is expected to resume LNG export shipments.

Tension in the natural gas market is gradually decreasing, says Oksana Lukicheva. However, she recalls that a difficult winter period is ahead, in connection with which gas prices will constantly receive support from high risks in all regions of consumption.

As for the next IEA opus, the Agency has become extremely politicized and, as a result, confidence in its calculations and forecasts is steadily declining, the expert notes. Their annual World Energy Outlook report this year shows that natural gas demand will decline by 0.4% from 2020 to 2030. At the same time, in the last year’s report in the same years, growth of 15% was expected…

Naturally, a lot has changed and gas prices have risen dramatically, but this is precisely what will sometimes cause a significant decrease in the consumption of this type of energy resource, and not because the resource has suddenly become useless. This kind of deficit is generally man-made and is a kind of financial energy starvation, when the majority cannot afford to use enough energy.

This year, the IEA is focusing on how many countries are trying to overcome resource scarcity by spraying funds into “clean” energy sources and once again citing the false climate problem as the reason for this, instead of directly talking about the real shortage of energy resources and the escalating struggle for them all over the world, says Oksana Lukicheva.

Meanwhile, a new week for European gas prices began with an unexpected rise to $1,400 per 1,000 cubic meters. m from levels of about $ 1,100 at the close on Friday at the TTF hub, said Mark Goykhman, chief analyst at TeleTrade. The market has been quite calm in recent days, quotes fluctuated at the levels of 1000-1150 dollars, two times lower than in September.

This is due not only to the high occupancy of European gas storage facilities, the analyst says. According to BloombergNEF, Northwest Europe, Italy, Austria will end the winter with gas reserves at a comfortable level of 38%, or 29 billion cubic meters. m.). Calm is also brought by the extremely warm autumn in Europe, where at temperatures of 20-25 degrees, the beach season is even continuing now.

However, the market resembles communicating vessels, points out Mark Goykhman. The diversion in recent weeks of significant volumes of LNG to Europe has created a “niche” in Asia. And now the gas quotes there have exceeded the European ones. This could prompt owners of LNG tankers waiting in line to unload off the coast of Europe to divert ships to Asia. The prospect of a marked drop in supply has lifted the quotes, and now, after a sharp surge on Monday, they even exceeded those in Asia on the JKM Platts spot index.

“If we draw an analogy with communicating vessels, not only in terms of supply, but also in terms of prices, we can assume that the rise in Europe will not continue significantly. Unless the weather changes dramatically. After all, the equilibrium level of “vessels” on TTF and JKM Platts is at about $1,300. Thus, a significant corridor has appeared — the price range is $1,200-1,400,” says the expert

It will probably last until Wednesday, suggests Mark Goykhman. On this day, the results of an extremely important meeting of the US Federal Reserve on monetary policy will be announced. Likely to increase the rate from 3.25% to 4%. The demand for resources may depend on the nuances of the statements and forecasts of the regulator, which can lead to changes in quotes in one direction or another, the analyst notes.

The bankruptcy of the FTX crypto exchange collapsed bitcoin (November 11, 2022)

“Ceramics are forced to reorient themselves to domestic raw materials” (November 10, 2022)