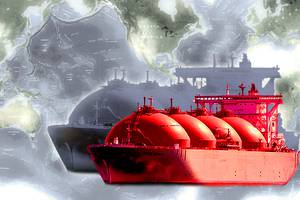 Europe has officially opened the winter season of energy consumption. Five large gas markets in Europe at once: Germany, France, Italy, the Netherlands and Poland have switched to gas extraction from underground storage facilities, Interfax writes. That is, the seasonal drop in temperature still forced the EU to start actively consuming “blue fuel”, although two weeks later than usual.

With the EU simply nowhere to pump new fuel, several shipments of liquefied natural gas were diverted from the Atlantic Ocean to the Pacific basin ahead of the peak demand season in Northeast Asia, despite the high cost of freight. It is reported by S&P Global Commodity Insights, citing its own sources. “Some players are diverting LNG shipments from the Atlantic to Japan, South Korea, Taiwan and China,” a Singaporean trader told S&P Global.

At the same time, the United States has sharply increased the rate of pumping gas into storage over the past week. In the week ending October 28, 3 billion cubic meters of gas were accumulated, which is twice as high as in the previous week, and in general is again in line with the average injection rate this autumn. However, the current level of reserves is less than 73%, which is significantly inferior to UGS facilities in Europe and Russia.

Everything would be fine if not for winter

Gas prices in Europe on a TTF basis have dropped to $1,180 per 1,000 cubic meters since the beginning of this week on the back of still warm weather and rising wind energy generation, Oksana Lukicheva, Commodity Markets Analyst at Otkritie Investments, confirms. Unusually warm October weather has reduced European demand for gas by about 10%, she said.

In the US, the cost of gas in Henry Hub (CME futures) rose to $6.4/mmbtu last week ($229 per 1,000 cubic meters). Natural gas reserves in US UGS facilities, according to the US Department of Energy, as of October 28 remained 2.8% lower than last year and 3.7% lower than the level for the past five years. Injection rates to storage increased during the off-season. Prices also benefited from the planned shutdown of the Cove Point LNG plant. At the same time, the current level of reserves is less than 71%, which is significantly inferior to UGS facilities in Europe and Russia.

However, further volumes of free gas to replenish stocks in storage facilities will decrease due to the growth of exports and the seasonal increase in consumption within the country, Lukicheva is sure. That being said, the Freeport LNG plant has yet to submit a restart plan to federal regulators, creating uncertainty about an early to mid-November restart date.

The cost of natural gas in Asia on a JKM basis fell to $27,815/mmBTU, or $995 per 1,000 cubic meters, falling below the price in the European market. Weather conditions in Asia are milder than in Europe, which allows the region to start the heating season later. However, several LNG carriers have diverted to Asian routes due to high UGS occupancy in Europe and uncertainties regarding unloading times.

Tensions in the natural gas market are decreasing, Lukicheva concludes, but the upcoming winter period may bring weather surprises, and therefore gas prices will constantly receive support from high risks in all regions of consumption.

The ships will stay…

The price of gas in Europe opened the new week by continuing the decline that occurred at the end of the previous one – from $1,400 to below $1,130 per 1,000 cubic meters. m, confirms the chief analyst of TeleTrade Mark Goykhman. He believes there are many reasons for this.

UGS occupancy is now excessive: for example, in Belgium – 100%, in Germany – 98%, in France – 99%. Over 30 LNG tankers are off the coast, with another 30 ships en route. Increased injection rates in recent months, combined with unexpectedly abnormally warm weather, create a certain excess of goods so far. In addition, according to the European Commissioner for the Internal Market, Thierry Breton, the EU countries have reached agreements on joint purchases of gas to contain prices.

Released on the morning of November 7, China’s year-on-year export and import data in October showed a sudden decline of 0.3% and 0.7%, respectively, while they were growing in September; an increase was expected last month as well. The reduction in foreign trade activity of the “workshop of the world” is a negative factor for demand and, accordingly, the cost of energy resources, the analyst says. Such a development of the situation can also be perceived as a harbinger of a recession in developed countries – Beijing’s main trading partners.

From these positions, inflation indicators in China on November 9 will be interesting, Mark Goykhman believes. In October, the consumer price index (CPI), already low, is expected to fall to 2.4% from 2.8% in September, and the producer price index to minus 1.6% from 0.9%. If so, then this is also an alarming “bell”, signaling a drop in domestic demand and a possible slowdown in the economy.

During the week, in addition, Thursday’s inflation data in the US may turn out to be important – not only as an indicator of the state of the economy, but also as a benchmark for the Fed’s monetary policy. According to the forecast, the excessively high CPI decreased in October to 8% from 8.2%.

On Friday, November 11, the market will pay attention to the speeches of a number of representatives of the European Central Bank and its economic forecasts. In this situation, according to Mark Goykhman, if the current circumstances remain the same, by the end of the week gas quotes may test the fundamental level of $1,000 per barrel.

The Federal Air Transport Agency named the countries to which there are direct flights from Russia (November 26, 2022)

Energy crisis in Europe will lead to years of energy problems in developing countries (November 9, 2022)