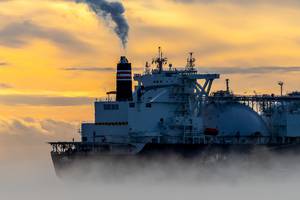 As much liquefied gas (LNG) as in October, Russia has not supplied to foreign markets since March of this year, i.e. in fact, since the beginning of the special military operation in Ukraine. According to Bloomberg, citing ship traffic monitoring data that the business agency has been conducting since 2016, Russian LNG exports in October increased by 1.1% in annual terms.

The dynamics of LNG exports is in complete contrast to the dynamics of Russian pipeline gas exports, which this year, for well-known reasons, has declined significantly. This was mainly due to the collapse in supplies to Europe, which, according to various sources, amounted to 85-90%.

Statistics on Russian gas exports also testify to the colossal difficulty of the task announced by the European Commission. We are talking about a complete rejection of Russian energy resources, including liquefied gas, of course. These difficulties are also evidenced by the composition of the top three LNG buyers from Russia. If the presence of China in it does not raise questions, then the large purchases of Japan, which has joined all anti-Russian sanctions, and especially France, an active participant in the sanctions process, naturally require explanation. If French President Macron had been asked such a question, he would probably have answered that the European Union, despite 1,184 sanctions imposed on Russia since February 24, 2022, for some reason did not introduce a single restriction on purchases of Russian LNG by EU members. As for Japan, everything is more or less clear with it too. Japan, as the head of one of the largest trading companies – Itochu, Masahiro Okafuji, said recently, cannot live without Russian oil and, of course, gas, whose share in the country’s gas balance is almost 9%.

Bloomberg believes that Europe also cannot live without Russian liquefied gas. However, approximately the same was said at the beginning of the year about pipeline gas. Especially strong need for Russian LNG has arisen right now, when only a few days and weeks remain before winter. Despite the fact that European countries have managed to fill underground gas storage facilities by more than 90%, this gas will hardly be enough for the winter, if there are no cold weather, during which energy and gas consumption increases sharply. Excess gas, moreover, at least not yet subject to any sanctions, of course, they believe in Paris, will not hurt.

France in this respect is an example of reasonable caution. Unlike, for example, neighboring Great Britain, which, despite the same difficult situation in the energy sector of the kingdom, did not buy a single cubic meter of liquefied gas from Russia after February 24. In January 2023, an official ban on the purchase of Russian gas, including LNG, comes into force in the United Kingdom.

Even more pragmatic are the Chinese, who are also increasing purchases of Russian liquefied gas, taking advantage of discounts on the spot market.

Musk ripped off the mask: businessman ‘tightens the screws’ on Twitter (November 11, 2022)

Who is really profiting from high LPG prices in Europe (October 28, 2022)