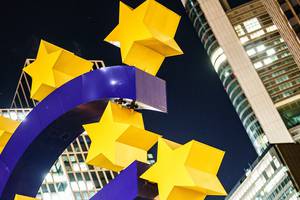 Inflation in the eurozone, which unites 19 European countries that use the single currency – the euro, reached a record 10.7% in October, according to Eurostat. At the same time, the GDP of the single currency zone in the third quarter grew by only 0.2% and again confirmed the fears of economists that a recession is inevitable. The economy really slowed down a lot – GDP growth in the second quarter was 0.8%.

“The risk of a recession is increasing,” Pablo Hernandez de Cos, head of the Spanish central bank, commented on the statistics.

Both inflation and the economy beat the expectations of Bloomberg economists: they predicted inflation growth of 10.3% compared to October 2021, and GDP growth of 0.1%.

Inflation statistics, of course, are not conducive to optimism, but last week we received encouraging and very unexpected news from Germany. The first economy in Europe refuted the forecasts of all economists who predicted a recession for it, and grew slightly in July-September.

Anti-leadership in inflation growth belongs to the Baltic countries, where it is twice the eurozone average. Although, according to economists interviewed by Bloomberg, statistics show that inflation in the three Baltic States has approached a peak. Consumer prices in October in Latvia increased by 21.8% compared to October last year, in Lithuania – by 22% and in Estonia – by 22.4%.

“Another jump in inflation in October confirms that the fourth quarter will be difficult,” Bloomberg quoted Bloomberg Economics economists Jamie Rush and Maeva Kazena as saying. “If you add rapidly tightening financial conditions to it, it becomes clear that a recession is likely to come in winter.”

Making forecasts for the near future regarding the energy crisis, the main driver of inflation in Europe in general and in the eurozone in particular, is now, as always, not easy. Warm weather and full underground gas storage facilities in many European countries led to a significant decline in gas and electricity prices (gas prices fell by 40% in October), but the overall situation remains very tense and the October decline in prices did not affect inflation in any way .

The ECB raised the discount rate in October again by 0.75%, but so far the aggressive tightening of monetary policy has not affected inflation either. The president of the Dutch central bank, Klaas Noth, believes that Christine Lagarde and his assistants at the last December meeting of this year should also raise the rate by 0.5-0.75%. However, a number of Knot’s colleagues see a serious danger in such a rapid growth of the discount rate.