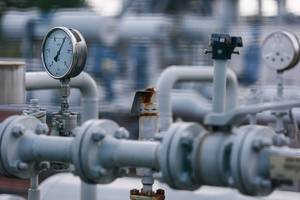 It would seem that European companies that have prepared gas for winter should now wait for the cold weather to come and gas prices to rise, and then sell it to consumers at a high profit. However, a very warm October and a 40% decline in gas prices in Europe confused all the cards for speculators.

Europe again does not know what to do with gas: sell it or take your time and wait for winter. Utilities and gas traders routinely pump gas into underground gas storage facilities (UGS) in the summer when prices are low and release it back to the market in the winter when prices understandably rise. This year, however, the dynamics of contracts, especially in Germany, Europe’s largest consumer of “blue fuel”, is moving in the opposite direction. This means that individual operators will have to sell gas at a loss to protect against supply disruptions.

In the summer, when gas was pumped into UGS facilities, gas prices rose to 340 euros per MWh. Now, under the basic winter contracts, gas is sold at 140 euros per MWh. If the reserves are not touched now, then, so to speak, “for everyday life” there remain the current gas supplies, i.e. LNG supplies from the USA and Qatar or pipeline gas from Norway and North Africa.

“In order to optimize their portfolios and maximize revenues, companies will prefer to buy gas from daily supplies rather than take it from storage,” Leon Izbiki, gas analyst at Energy Aspects, explains to Bloomberg the situation in the gas market of the continent.

Filling UGS facilities this year has cost European taxpayers tens of billions of dollars. And while traders often pre-sell gas immediately after it has been pumped into storage in order to protect themselves from risk, they can still incur serious losses due to price differences. This consideration is especially important for those utility companies and traders who have long-term contracts with Russia, which last winter provided Europe with 20% of all EU gas needs.

UGS facilities are already filled to capacity, but only 10% of the collected gas in strategic reserves is under the direct control of officials. Partially, companies bought gas in the summer with the help of state subsidies. The authorities were especially active in helping to fill UGS facilities in Germany. Suffice it to say that the German government allocated 15 billion euros to Trading Hub Europe to purchase gas for storage. With this money, the gas market operator in Germany bought about 60 TWh of gas, which is almost a quarter of the volume of all German storage facilities.

To avoid risks with gas supplies, the authorities may introduce a state of emergency. In this case, the authorities in Germany and other European countries will be able to print out the reserves.

The Bundestag this year passed a law that regulates the filling of UGS facilities. Now, on the eve of November 1, the usual start of the heating season in Germany, German storage facilities are on average 95% full. According to the new law, the level of gas in UGS facilities on February 1, 2023 should not be lower than 40%. Violation of these parameters can result in heavy fines for storage operators.

Underlying futures are down about 70% from their peak in August. The collapse of gas prices was facilitated by abnormally warm weather for mid-autumn. Demand for gas decreased in October, and its withdrawal from UGS facilities also decreased. In Brussels, they were surprised to find that now on the continent, it turns out, not a shortage, but an overabundance of “blue fuel”. However, the EU needs to keep gas prices on the domestic market above Asian ones in order to prevent competitors from intercepting LNG carriers.

Taking into account the collapse of Russian gas supplies and the quite possible complete cessation of their supplies, most experts believe that the issue of rising gas prices is purely rhetorical. Now everyone is wondering: when will prices rush up again, and will they not rush at all?

Much, of course, depends on the weather. Meteorologists from the Weather Company have already predicted a slight drop below normal in mid-November.

“Cold weather, a collapse in demand or LNG supplies below expectations can quickly return prices (for gas) to their previous high levels,” explains Stefan Ulrich, an analyst at BloombergNEF. in his purchases. It’s better to put up with some losses.”

Ministry of Defense: all Russian servicemen crossed to the left bank of the Dnieper, no casualties (November 11, 2022)

Japan will seek to maintain participation in the Sakhalin-1 project (November 1, 2022)