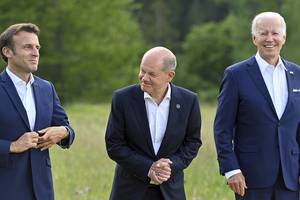 Late last year, Joe Biden, in an atmosphere of great optimism, announced in Brussels a new era in the world’s largest bilateral trade relationship between the US and the European Union (EU). In the previous four years that Donald Trump was in the White House, trade relations between the US and the EU were tense, to say the least. Trump has imposed tariffs on both Chinese and European goods. President Biden canceled his predecessor’s tariffs on European goods totaling $21.5 billion, paused the 2004 aircraft assembly dispute, and began talks to reduce the oversupply of steel and aluminum.

Since then, 12 months have passed. Now the situation has changed radically, there is not a trace left of the former optimism. Even the most ardent US allies in the EU are now complaining about the outrageous actions of the US, the latest of which was $370 billion in green energy subsidies under the Inflation Reduction Act (IRA).

Last week, French President Emmanuel Macron accused the Biden administration of a double standard that hurts the “sincerity” needed in a $1.1 trillion trade relationship. In his opinion, it is impossible to sell raw materials to allies at prices that are 3-4 times higher than prices inside the United States.

Macron and other European leaders are firmly convinced that the law contains illegal subsidies for electric car manufacturers, the development of renewable energy sources, the development of aviation fuel and hydrogen, which could lead to a new Transatlantic trade war. Industrial subsidies are at the root of many of the disputes that the World Trade Organization (WTO) has to deal with every year.

By the way, Macron and German Chancellor Olaf Scholz, during a recent working lunch in Paris, which took place in a very tense atmosphere, nevertheless found at least one topic on which their views coincide. These are differences between Europe and the US on trade and subsidies. The French and German leaders, of course, hope for a diplomatic solution to the problems at the negotiating table, but if they fail, they are ready for decisive retaliatory actions.

Next week, US and EU representatives will try to sort out the problems of the IRA. This meeting will test the strength of Biden’s determination to restart the transatlantic relationship. Moreover, the Europeans are hinting that its failure may prevent Biden from achieving his main goal – the economic isolation of China, clearly meaning his support for America’s actions.

The trade dispute between Washington and Brussels came to the fore at a time of unprecedented levels of US-EU coordination over sanctions against Russia and response to China’s particularly egregious (according to the US) violations of international trade rules.

American subsidies for the development of “clean” energy will also be the main subject of discussion at the meeting of the US-EU Council on Trade and Technology (TTC), which is scheduled for December 5th. The Europeans hope that the discussion will move from technical discussions to concrete measures. Brussels wants the Biden administration to take into account their concerns on these issues by December.

The Ministry of Defense announced new successes of the RF Armed Forces in Ukraine (November 3, 2022)

In the west of Moscow, the city operator is reorganizing the former industrial zone – Efimov (November 2, 2022)