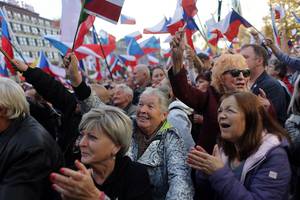 It looks like the upcoming winter in Europe is finally sorted out. According to the International Energy Agency (IEA), underground gas storage facilities (UGS) on the continent are filled with more than 90%. This means that the Europeans will have enough gas for the winter and they will not freeze, unless it is very cold. Now in Brussels, writes CNBC, you can take a breath and think about the next winter, the winter of 2023-24, which promises to be much harder in terms of gas supply than the winter of 2022-23.

There is only one reason, but it is quite serious. This year, UGS facilities were pumped mainly with Russian gas, the supply of which in the first half of the year was still quite large. However, in the summer of 2023, when it will be necessary to start filling storage facilities by the new winter, there will be no gas from Russia in Europe at all, or it will be too little, as it is now, and clearly not enough to fill UGS facilities. The worst thing for the European authorities and national governments will be that serious riots could break out on the continent, in comparison with which the current protests will seem like a mere trifle.

Experts and heads of major energy companies spoke a lot about the difficulties ahead for the Europeans in a year’s time last week in Abu Dhabi at the international energy conference Adipec.

BP CEO Bernard Looney, who participated in the same panel, fully agreed with him. He drew the attention of the audience to the fact that energy prices are approaching unsustainable levels. Already now there are people who spend 50% or more of their income on energy bills. Looney also believes that the winter of 2023-24 will be harder than the upcoming winter.

The point of view of Looney and Hardy is fully shared by the head of the Italian energy giant Eni, Claudio Descalzi. Speaking about the fact that Europeans will have a very hard time next year without Russian gas, he stressed that Europe owes its successful preparations for winter to China, which, due to outbreaks of the pandemic and lockdowns, has actually withdrawn from the spot gas market and has made it much easier for European countries to fill UGS facilities. .

“We are well prepared for this winter,” Descalzi said, “but as we have already said, the main problem is not this, but next winter, because next year we will have 98% less Russian gas than this year. Or maybe it won’t exist at all.”

If we try to predict the consequences of such a situation, then we can safely talk about a sharp increase in the degree of the social situation on the continent next year. Moreover, it has risen already now with full storage facilities and the payments of subsidies that have begun.

Anti-government demonstrations in Germany and Austria in September and in the Czech Republic last week are, one might say, a rehearsal for the main speeches that could take place at the end of 2023.

By the way, there are no less serious riots not only in Europe, but also in Asia, where the main importers of energy resources on the planet are located.

The anger of many demonstrators is directed not only at local authorities and politicians, but also at energy companies that regularly raise energy bills and make huge money from the energy crisis.

All the problems of the planet and, first of all, of Europe rest on the imbalance between the demand for energy resources and their supply, the reason for which is a significant underfunding of the energy sector. European governments have in recent years focused too much on the transition from fossil fuels to renewable energy sources and invested very little in the oil and gas sector. Many participants at the Abu Dhabi conference agree that the green transition is a mistake, because the current energy sector is still largely hydrocarbon-based.

Many politicians refuse to admit that they were clearly too hasty in phasing out oil, gas and coal and insist on continuing the transition. So, as recently as June, UN Secretary General Antonio Guterres called for an accelerated green transition and called investment in the exploration of new oil and gas reserves “crazy.”

Oilers argue that this approach has nothing to do with realism, because, among other things, it also provokes economic and political instability.

Now, according to their deep conviction, is not the right time to switch to renewable energy sources, because huge funds are needed to combat the energy crisis. Speakers at the conference in Abu Dhabi, for example, Claudio Descalzi, talked a lot about the fact that in Europe they pay 6-7 times more for energy than overseas. He also stressed that in Europe they help the population with the help of subsidies, but it is impossible to pay subsidies indefinitely. By the way, many European countries are heavily indebted. And of course it’s growing fast.

The Ministry of Defense announced the suspension of Russia’s participation in the “grain deal” (October 29, 2022)

Russia has shown interest in importing clothes and shoes from the DPRK (November 4, 2022)