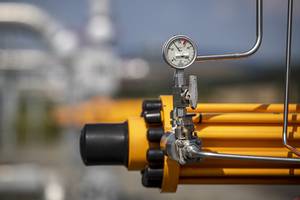 The euphoria that has been observed in Europe in recent days against the backdrop of declining gas prices may evaporate in the coming days if prices creep up. Gas futures stopped the month-long decline and on Wednesday, October 26, rose by 5%.

The day before, European energy ministers set a new date for a final decision on the latest package of measures aimed at curbing energy prices. It remains to be decided how to effectively limit gas prices and whether it is worth introducing a “ceiling” of prices for it, following the example of oil, according to Bloomberg, on Thursday, November 24. The reason for the postponement is the disagreement between the members of the European Union on this issue, which prevent the Europeans from quickly making important decisions on all serious problems all this year.

The main European power engineers yesterday reached a fundamental decision only on gas purchases common to the entire European Union. Obviously, this will follow the example of joint procurement of vaccines during a pandemic. However, other measures to combat the energy crisis, which may have very serious consequences for the market, are bogged down in discussions.

Europeans perked up with the advent of the Indian summer and now it is not as gloomy as, say, in September, they are waiting for the arrival of winter. In addition to the high degree of filling of underground gas storages (UGS), the unexpected wave of optimism is also to blame for the weather, which gave the continent an abnormally warm October and made it possible to postpone the start of the heating season.

Today, for example, in Paris and London at ten o’clock in the morning it was 17 °, and in the afternoon the thermometers will rise above 20 °. However, not everyone fell into euphoria, of course. Many Europeans are well aware that the changeable autumn weather can deteriorate at any moment and that even short-term cold weather in winter can still be avoided. Meanwhile, it is well known how cold snaps, even lasting a few days, literally “eat up” gas reserves in UGS.

“We are still hostage to a very harsh winter,” said Matthew Baldwin, Deputy Director General of the Energy Department of the European Commission, at an international energy conference in London this week. “Europe continues to be hostage to interruptions in the supply of LNG (liquefied natural gas).”

Dutch futures for November gas deliveries jumped in Amsterdam at 9.02 am local time to 103.81 euros per MWh. This is 45% lower than the beginning of October, but 4% higher than they were yesterday.

Despite the strong decline in gas prices in October, they are still three times higher than normal prices for this time of year. The pressure of very expensive gas on business, if weakened, is quite insignificant. Perhaps the current gas prices should no longer be called “astronomical” and “outrageous”, but they continue to put pressure on the economy and keep inflation at a very high level.

The European economy continues to suffer huge losses. BASF SE, for example, recently reported that in the first 9 months of 2022, the company’s gas bills, moreover, we are talking only about business in Europe, increased by approximately 2.2 billion euros; and Uniper SE reported losses of 3.2 billion euros.

A nutritionist named a popular product that extends life by 10 years (November 1, 2022)

Innovations accessible to all: the VII Forum “Innovation Time” will be held on December 7-8 (November 24, 2022)