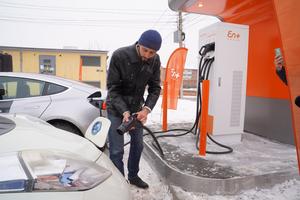 Modern chargers for electric cars appeared in the Novo-Lenino microdistrict in Irkutsk, as well as in the Usolsky and Cheremkhovsky districts, on the way from the city to Lake Baikal. Thus, the total number of the company’s own filling stations in the region has grown to 16. The holding intends to expand the network of electric filling stations further in order to contribute to the preservation of the environment of this unique region by applying “green” technologies in practice.

On each such EZS, two electric cars can be charged at the same time. According to the company, on average, it will take about 20 minutes to fill the battery of the Nissan Leaf – the most common electric car in Russia. Note that the cost of a mileage of 100 km on an electric car will also be half as much as on a gasoline car of this class. And if you “recharge” at night, when 1 kW in the Irkutsk region costs 1 ruble, then a trip of 100 km in an electric car will cost 64 rubles.

“The development of green technologies is very important for the En+ Group. Following the goals of sustainable development is manifested in many of our projects, and the network of charging stations for electric vehicles is one of them,” said Mikhail Khardikov, head of the energy business at En+ Group. He added that along with the development of the necessary infrastructure, this type of transport in the region began to gain popularity, especially in Irkutsk. “We listen to the requests of motorists and continue to open new complexes in the most sought-after places in the region,” he said. Mikhail Khardikov also expressed the hope that from 2023 the Irkutsk region will be included in the list of regions that receive subsidies for the development of the EZS network.

We add that the company opened the first three filling stations in the Irkutsk region back in 2020. They quickly became popular, which prompted En + Group to develop them into their own network.

Journalists of the Avtovzglyad publication drove electric cars from Irkutsk to Lake Baikal this fall. They noted that the ultra-modern design with backlight and connectors on power wires against the backdrop of a clean field where cows graze looks very futuristic. Like something that accidentally fell out of a flying spaceship. “But, apparently, this is exactly how new technologies break into the most remote corners of the country,” they say in the publication.

According to En+ Group, since the launch of the first EZS, more than 1.5 thousand people have used their services, and the total amount of electricity consumed has exceeded 230 thousand kilowatt-hours. All En+ Group electric stations are equipped with Russian equipment, and to start using them, you need to install the EV-Time application on your smartphone.

By the end of the year, the company plans to open several more electric filling stations in Bratsk and the Tulunsky district, which will increase their number to 18. In addition, the first En + Group station will also appear at the Krasnoyarsk airport by the end of this year. This means that it will become even easier for owners of “green” cars to travel around Siberia.

The Ministry of Agriculture announced a record harvest of rapeseed in Russia (November 3, 2022)