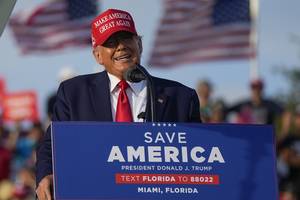 Rumors that Trump will announce the start of the presidential campaign after the midterm congressional elections come from various sources, including those close to the former president. Yesterday, he gave another reason to strengthen these rumors and named a specific date for the likely announcement of his participation – November 15th. Obviously, Trump’s decision depends on the results of the midterm elections, which will be held with the United States today, November 8th.

The former owner of the White House looks more powerful and active than his successor, and, one might say, much more fun. However, the majority of voters almost equally do not want to see either Biden or Trump as candidates for the presidency – 64% and 68%, respectively. But it is these two middle-aged men who have a great chance to fight for the main seat. Recall that the White House has repeatedly stated that Biden plans to run for a second term in 2024.

For Trump, two questions are important: which Republicans will win Congress, and how convincing their victory will be (in terms of seats in the House of Representatives and the Senate). The answer to the first has already been received and is quite satisfactory for the former president.

After supporters of the outgoing president broke through to the Capitol on January 6, 2021, the split within the Republican party became apparent. A minority went into opposition, most supported Trump. Over the course of two years, Trump has supported 208 candidates at all levels, of which 197 (95%) won.

For example, Wyoming House Representative Liz Cheney lost her mandate because she openly opposed Trump. Cheney is no ordinary Republican, she was the third person in the leadership of the party. In addition, her father (former vice president, Dick Cheney) was one of the leaders of the party and represented Wyoming for 10 years (from 1979 to 1989). Cheney was not only recognizable and influential, but also significantly outnumbered her opponent in terms of the size of the campaign budget ($15 million versus $4 million). However, the latter had the support of Donald Trump, which led her to victory.

We will receive the answer to the second question only on the morning of November 9th. Most forecasts predict a heavy defeat for the Democrats. Both the current domestic political context and the historical trend contribute to this. On average, from 1946 to 2018, the President’s party members lost 23 mandates in the House of Representatives in the midterm elections, and 3 in the Senate.

There are four scenarios for the development of events in 2022. According to the first, the Republicans win a landslide victory in both houses of Congress. The second calls for a significant victory in the House of Representatives and maintaining the status quo in the Senate. In these cases, the likelihood that Trump will announce his candidacy is close to 100%.

In the third scenario, the Republicans win the usual majority in the House, but the Senate remains split 50/50. Then the probability of Trump’s nomination for the presidency, although reduced, remains real. The relevance of the third scenario seems doubtful, but it takes place. Yes, the Republicans are on their way to victory, but not because their agenda is closer to the voters, but because the latter are simply dissatisfied with the activities of the Democrats.

Also, the radicalism of some Republican candidates may minimize its chance of a landslide victory. According to a study by the Brookings Institution and the Public Institute of Religion, 42% of Americans surveyed would prefer to vote for moderate politicians, centrists.

In addition, the annulment of the decision of the Supreme Court “Row against Wade” (the decision of the Supreme Court on the legality of abortion) has activated the democratic electorate and not only. The majority (52%) of independent voters – the main group of the population for which there is competition – support the legalization of abortion. At the national level, this topic ranks second in importance to the electorate (in the first place – the economy), ahead of crime and immigration.

Since gaining control of the House of Representatives in 2018, Democrats have launched a series of investigations into various aspects of Trump’s activities. In August, an election committee (the main purpose of such organizations is to manage citizens’ donations to a candidate’s campaign) associated with the ex-president paid $3 million to Critton, Luttier & Coleman, LLP for legal advice. As long as Trump remains politically active, he will continue to receive money from his supporters, which will continue to allow him, in particular, to pay for the services of lawyers.

Even if the Republicans win only in the lower house, they will immediately stop most of the investigations directed against the former president. This will allow him to concentrate on the main goal – the White House.

Prices for buckwheat and sugar fell in Russia (November 9, 2022)