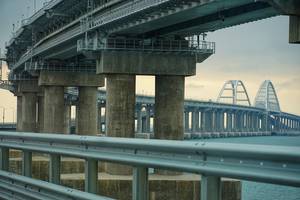 Reserve Colonel of the Armed Forces of Ukraine Roman Svitan said that in the near future Ukrainian troops will try to attack the Crimean bridge and the Black Sea Fleet in Sevastopol.

In an interview with Pravda.ru, he said that the Ukrainian company Ukroboronprom has already launched mass production of drones, the flight range of which is allegedly 1,000 km. And it is with the help of these UAVs, according to the reserve colonel, that Kyiv can strike.

“Ukrainian drones will soon be attacking Russian naval facilities. I think the end of November – the beginning of December, we will hear the work of these drones with blue and yellow flags,” Svitan dreams aloud.

As before wrote “Expert”veteran Israeli intelligence, military expert and political scientist Yakov Kedmi, drawing attention to the fact that Ukraine and the West regularly threaten Russia’s infrastructure, warned that the Kyiv regime could try to destroy the Crimean bridge.