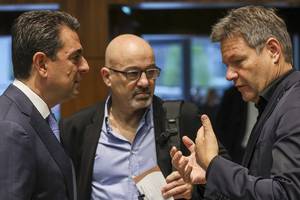 Apparently, the European Union has lost hope that the ceiling on Russian gas prices, following the example of the ceiling on oil prices, which should come into force in less than a month, on December 5, will be able to reduce the prices of “blue fuel”. Bloomberg draws such a disappointing conclusion for Europeans after yesterday’s meeting in Brussels of representatives of the European Commission (EC) with representatives of the EU member states, at which the most pressing problem for the continent now was discussed – how to contain the rise in gas prices and survive the winter with less losses. The EC urged European leaders in October to examine and evaluate a set of measures, including a dynamic price band for gas deals, and has now prepared a series of legal proposals.

Having lost faith in the ceiling, European officials propose a plan that will allow, so to speak, to “stretch” the price increase over time and thus make it less difficult.

Opinions regarding the gas price ceiling in the united Europe are divided. The group of countries led by Italy, Poland, Belgium and Greece is most actively in favor of limiting prices for it, the growth of which destroys the European economy and fuels inflation. Previously, the European Commission objected to intervention in market relations, but in autumn the resistance in Brussels weakened. For the EU summit in October, the EC has developed an emergency package that will help limit price spikes at the virtual gas hub TTF, which determines gas prices across Europe.

A change in the EC’s attitude towards the gas price ceiling could undermine a quick deal on the above-mentioned package of measures, which, among other things, also proposes actions to eliminate the very high volatility of energy derivatives and use the joint purchasing power of the EU in negotiations with gas suppliers. European energy ministers are due to meet in Brussels on November 24 to agree on a package of measures.

Countries supporting the gas price ceiling have criticized the European Commission’s sudden shift in stance, but the Netherlands and Germany have insisted on an in-depth analysis.

The heat of passion is easy to understand because the stakes are very high. At stake is Europe’s $17 trillion economy, which the energy crisis threatens to send into recession. The European authorities are trying to balance between the 27 members of the Union, but it is becoming more and more difficult to find a compromise and a solution that suits everyone every day that brings winter closer.

The Ukrainian crisis fueled the demand for gold (November 5, 2022)