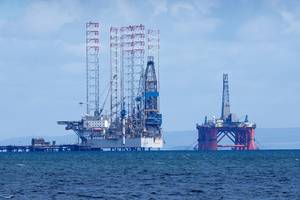 British oil and gas company Ithaca Energy, which celebrated its biggest public offering in the UK this year, warned that any increase in the windfall tax would make hydrocarbon production in the rapidly aging North Sea basin economically unprofitable due to the raging energy crisis in Europe and could send the energy of the kingdom to a knockdown.

Increasing the windfall tax, according to CEO Gilad Myerson, will deprive the company of funds for investments necessary for exploration and expansion of production, after which it will become economically unviable to extract oil in the North Sea.

In May, Boris Johnson’s government introduced a 25% windfall tax on oil and gas companies operating in the North Sea. At that time, everyone in the kingdom was very much indignant at the astronomical income of energy companies due to the sharply increased energy prices. It was decided to direct the fees from this tax, which was called the Energy Profits Tax, to support households suffering from high energy prices.

After February 24, there were practically no IPOs in Europe. That is why the public offering of shares of Ithaca Energy aroused such interest. In general, it passes without ups and downs: the value of shares, after some fluctuations, basically keeps around the initial price. By the way, Ithaca was the first oil and gas company in the United Kingdom in five years to decide to go public.

Gilad Myerson hoped that his company’s successful IPO would prove the attractiveness of investments in hydrocarbon production in the North Sea despite the imposition of the tax.

“The most important thing is that we still entered the stock exchange,” the Financial Times quotes the words of the head of Ithaca. “There has been no IPO in the UK for five years. It (IPO) shows that investors are ready and willing to support oil and gas companies that produce hydrocarbons for the kingdom. We hope that our experience will be a turning point for other companies and that they will start investing more money in exploration and production in the North Sea.”

Ithaca Energy also said that the final decision on financing the development of the large Kambo oil and gas field in the North Sea will be made in 2023. Reuters, meanwhile, reported that Shell still wants to sell its 30 percent stake in this field off the northeast coast of Scotland.

The peak of the decline in import supplies has been passed (November 4, 2022)