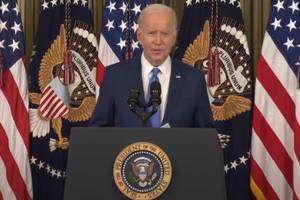 Elections to the Senate and the House of Representatives of the US Congress were held without any interference.

This was stated during a press conference by President Joe Biden. “Voters, employees and members of the election commissions – they did their job and did their duty, and, apparently, without much interference at all,” the White House press service quoted the head of state as saying.

In his speech, Biden also stressed that he was ready to work with the Republicans. “I think the American people have made it clear that they expect the Republicans to be willing to work with me as well,” the president said during a press conference.

The President acknowledged that Americans are dissatisfied with the current situation in the country. The head of the White House assured that soon the people of the United States will feel the “positive effect” of the initiatives put forward by him.

Biden said he plans to run for a second presidential term and will announce his final decision in early 2023. “We will make a decision in the family circle. I think everyone wants me to run. I don’t think there is a need to rush here,” Joe Biden said.

Speaking about Ukraine, the American leader noted that Washington does not provide military support to Kyiv on many points and does not intend to directly get involved in the conflict and “get involved in the third world war.” Such an outcome of the development of events, according to Biden, would lead to catastrophic consequences for the planet.

At the same time, commenting on the withdrawal of Russian troops to the left bank of the Dnieper, the US president confused Kherson with the Iraqi city of Fallujah.

In the November 8 elections, US citizens completely re-elected members of the lower and chamber of Congress, and partially of the upper. Previously, the majority of seats in Congress were held by representatives of the Democratic Party, of which the president is a member; now, judging by the preliminary results of the vote, the Congress will be able to control the Republicans.

The final results of the elections will be summed up in December. According to the latest data from CNN, out of 435 seats in the House of Representatives, the Democrats won 191, the Republicans – 209. To get a majority, one of the parties needs to have 218 seats. Republicans will get 219, according to NBC forecasts; the fate of the Senate is still uncertain.

Former Republican President Donald Trump called the results of the election a big victory, although he admitted that they were “disappointing” for him.

On the eve of the press secretary of the President of the Russian Federation Dmitry Peskov said that one should not overestimate the importance of the elections in the United States and expect any change in Russian-American relations in the near future.

The best essays by schoolchildren on the theme of the Battle of Stalingrad will be selected in early November (October 27, 2022)

The Central Bank assessed the consequences of the outflow of household funds from deposits (November 8, 2022)