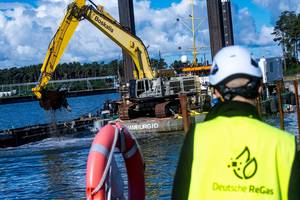 It seems that in Berlin they were imbued with the slogan: “Everything for liquefied natural gas (LNG), everything for victory!” and are ready for the sake of LNG, which has now become the most important and vital resource in Germany, to encroach on the most sacred thing in the democratic world. Olaf Scholz’s cabinet wants to get the right to expropriate private property in cases where it will help speed up the launch of LNG projects.

On October 2, according to Bloomberg, the federal government approved a draft law allowing the authorities to expropriate so-called “movable property”, i.e. private property that you can take with you as opposed to real estate. In addition, the new law will, if necessary, give wider access to information on connecting infrastructure, for example, on railway infrastructure.

We are talking here, first of all, about floating LNG terminals (platforms). The authors of the law on the expropriation of property hope that it will facilitate and speed up the introduction of them into operation. In total, four floating LNG terminals are planned to be built in Germany to receive liquefied gas. They will be located near Lubmin, Brunsbüttel, Wilhelmshaven and Rostock. Their meaning is that they can be built much faster and cheaper than stationary LNG terminals, which are… absent in Germany. In total, there are only 48 ships on the planet capable of receiving LNG from gas carriers. Naturally, most of them are chartered under long-term contracts. The cost of renting a few free ones is very high and reaches 200 thousand euros per day. The first such floating LNG terminal, according to the plan, should start operating in December near the town of Lubmin, Mecklenburg-Western Pomerania, the landfall site of the Nord Stream gas pipeline.

An official representative of the German Ministry of Economics said that calling the new law an “expropriation law” is a big exaggeration, because it supposedly only involves the modernization of outdated rules in accordance with the requirements of the time.

Germany, like the rest of united Europe, intends to completely abandon Russian pipeline gas and replace it with liquefied gas, mainly (at least for now) from America. This gas is delivered by sea in specially equipped tankers – gas carriers. After February 24, when the final decision was made to refuse gas from Russia, it turned out that in Germany, which had been using cheap Russian gas for several decades, there was no infrastructure for receiving LNG and returning it to gaseous form. The floating LNG terminal will be the first German LNG infrastructure facility. It will be operated by the energy company Deutsche ReGas. By the way, they are pleasantly surprised by the initiative of the Scholz government, which will now need to be approved in the Bundestag.

What is “movable property”, according to the authors of the new law, is not very clear. In the specific case of the LNG terminal in Lubmin, we are obviously talking about the onshore facilities of the Nord Stream gas pipeline, which is now idle because Berlin refused to certify it at the beginning of 2022. These facilities may well be needed for the first German floating LNG terminal.

The fate of the pound will be decided by politics, the dollar and Sunak (October 27, 2022)

The head of Sevastopol called on the citizens not to publish the results of the air defense work (October 29, 2022)