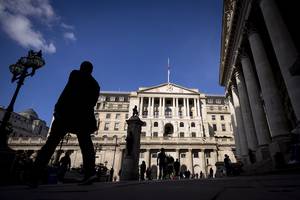 On Thursday, the Bank of England raised the rate for the eighth time in a row – and immediately by 75 basis points, to 3%. This is the sharpest rise since 1989.

Against the background of world central banks, this step does not look outstanding. The Fed did exactly the same on Wednesday, and the ECB did the same last week. The first did it four times already, and the second twice.

That is why – although the tightening of monetary policy in the UK began earlier than anyone else in the G7 (back in December) – now in the United States, which started it in March, the rate is noticeably higher – 3.75-4%. This difference in rates, which has grown over the past six months, has put a lot of pressure on the exchange rate of the pound sterling lately.

At the same time, the unhurried rate hike that has been going on since last year has not led to much success in the fight against inflation. It jumped to 10.1% in September and is expected by the Bank of England to rise to 11% in the fourth quarter. This was largely due to the fact that prices in the UK were rising for reasons that were difficult to influence the monetary policy of the Bank of England. He could only observe the rise in world food prices and the rise in quotations on the commodity markets from the sidelines.

Disrupted by the pandemic, and then by the situation around Ukraine and all sorts of sanctions and self-restraints, the Bank of England could not restore supply chains either. Meanwhile, the inflationary spiral in the country was unwinding.

Against the background of rising price tags in stores, workers demanded and received pay increases – nominal wages in the private sector grew rapidly. At the same time, the purchases made by these additional incomes spurred consumer prices up. But the growth of wages lagged behind inflation, so that in real terms they declined, which also reduced the rate of GDP growth. And the economy in the course of tightening monetary policy slowed down quite clearly. According to the Bank of England, a recession has already begun in the UK.

From his point of view, it should be the longest since at least the 1920s, when the first reliable statistics appeared, reflecting the state of the economy. However, the regulator reassured the public that the recession will be, although protracted, but not as deep as during the global financial crisis. However, Bank of England Governor Andrew Bailey told Bloomberg yesterday that the economic turmoil the UK is facing is greater than that of the 1970s.

UK GDP is projected to contract by around 0.75% in the second half of 2022, reflecting a decline in real incomes. Subject to an increase in market interest rates, the fall will continue in 2023 and the first half of 2024. The Bank of England cites high energy prices and tighter financial conditions as the reason.

However, the bank said that the majority of members of the Monetary Policy Committee believe that further rate hikes may be required for a sustainable return of inflation to the target level. The Bank of England’s statement, however, contains the assertion that the peak of the recovery will be lower than what the markets are now assessing.

“We think that the bank rate will have to rise less than what is currently estimated in the financial markets,” said Andrew Bailey at a press conference. “This is important because, for example, it means that new mortgage rates will not have to rise in the way they used to.”

The market did not particularly agree with this statement. His first reaction was the fall of the pound and the rise in the yield of British government bonds. Investors have fears that less than expected by the markets, rate hikes will not be enough to curb inflation.

The pound sterling fell 2.1% to a low of $1.1152. Yields on 30-year bonds — among the most sensitive to consumer price prospects — shot up more than 20 basis points at one point.

By evening, yields declined, but the pound was still trading at lows. The futures market practically did not change its opinion regarding the peak rate – 4.75%. So traders are very doubtful of the words of the Bank of England.

“The BoE had no choice but to live up to market expectations for a 75 bps rise,” Hugh Gimber, Global Markets Strategist at JP Morgan Asset Management, told Bloomberg. “Such a large increase may seem unjustified given signs that economic activity in the UK is already declining, but so far there is little evidence that this slowdown is enough to contain inflation.”

Russian teachers will be sent to schools in Kyrgyzstan (November 5, 2022)

Attack of Ukrainian drones on Russian ships in Sevastopol put an end to the grain deal (October 31, 2022)

How to desulfate the battery with your own hands? (November 2, 2022)

The number of currency smugglers has increased in Russia (October 31, 2022)