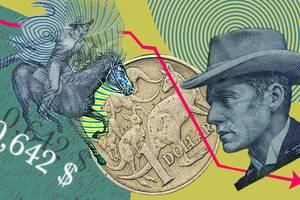 The Aussie remains near $0.642, hovering near a weekly low, as the Reserve Bank of Australia (RBA) hiked the rate more modestly than markets had expected, by 25 basis points, contrary to some analysts’ predictions of a bigger move higher. In addition, the expected decision of the Fed to raise rates in the US also put pressure on the “kangaroo”, and on November 3 it continued to decline against the dollar, albeit at a slower pace than in previous days.

Since May this year, the RBA has raised rates by a total of 275 basis points to 2.85% and has signaled further monetary tightening as it seeks a compromise between lower inflation and the desire to keep the country’s economic growth going.

Australia’s annual consumer prices rose 7.3% in the third quarter from 6.1% in the second, showing the fastest rate of increase since 1990. The central bank also revised upward its inflation forecasts for the fourth quarter to 8% instead of 7.75% and slow to 4.75% only by the end of next year.

The Australian dollar (AUD) is the fifth most popular currency for trading, reminds Vladimir Sagalaev, financial analyst at the CMS group of companies. The main drivers of the AUD rate will be the state of the Australian economy and the monetary policy of its Reserve Bank. The country’s economy ranks 14th in the world in terms of nominal gross domestic product (GDP).

The Australian dollar is often traded as a commodity currency – along with the Canadian (CAD), New Zealand (NZD) and Singaporean dollars (SGD), as natural resources are an important part of the Australian economy, the expert points out. The country is an important exporter of raw materials, including iron ore, coal, oil and gas products, and industrial metals. Mining accounts for 11.5% of the economy and natural resources for 68.7% of exports. The growth of exports, as a rule, is associated with an increase in the exchange rate.

The Australian dollar is also often traded as a tool to take a position in the Chinese economy, with exports to China accounting for 36.5% of total exports.

But imports require obtaining foreign currency to pay foreign sellers. AUD/USD (Australian dollar to US dollar) is one of the most traded currency pairs in the world. Yesterday, November 2, it was trading at levels around $0.64. It was a continuation of the decline as the Reserve Bank of Australia announced a modest 25 basis point rate hike on November 1, contrary to some analysts’ expectations that the hike would be larger.

Thus, the continued rise in inflation, the RBA with its slight increase in the key rate and weak growth prospects for the Chinese economy significantly weaken the Australian dollar. Therefore, Sagalaev expects, the AUD/USD pair will continue to decline until the end of the year and will trade at about 0.62 cents. In 2023, the price of base metals (iron ore and copper) will put pressure on the Australian dollar. And if the world economy — and China in particular — slows down and goes into recession, then the demand for resources will fall, and the kangaroo may continue to jump down to 0.58 cents.

The Australian dollar is in line with the general trend of the foreign exchange market, says Mark Goykhman, chief analyst at TeleTrade. And that, in turn, basically follows the dominant player – the US dollar. Or rather, against it, since the dependence of rates is the opposite. If the “American” is growing, then the rest are declining – and vice versa. And the dollar is strengthening – primarily due to the rigidity of the US Federal Reserve, which is raising the rate in the literal and figurative sense to fight inflation. So at the meeting on November 2, it immediately increased from 3.25% to 4%. It was expected, but the accompanying rhetoric is interesting.

The Fed noted that the main impact of the rate is already behind, and in the future it will be raised more slowly. This, the analyst believes, is a plus for alternative currencies. But due to the slowing pace of such increases, the rate itself will eventually be higher than previously thought. It’s just that the cycle will take longer – that is, the driver of the strengthening of the US dollar becomes long-term. And this is already a minus, a factor of weakening other currencies. And the minus for the market turned out to be stronger than the plus. Against this background, on Wednesday, the pair AUD / USD in its throwing on strong news fell from 0.650 to 0.635, and Thursday continued to move towards 0.631.

In general, the “kangaroo”, as traders call the Australian currency, is still vulnerable, says Goykhman. And in the future it may go below the low of the current year 0.617. After all, the rate of 2.85% is not only much lower than that of the Fed, but also does not imply such a significant increase as in the States. Inflation in the United States is 8.2%, while in Australia it is noticeably lower – 7.3%. Therefore, the return on assets in US currency is higher than in Australian, which contributes to the redistribution of funds in their favor. Finally, the dollar is traditionally viewed as a “safe haven”, a protective asset in the event of a global recession. While the Australian, on the contrary, is perceived as a risky asset – because of the raw orientation of the country’s exports.

Thus, Mark Goykhman expects, the movement of AUD/USD is now tactically directed to a strong support level of 0.62. This is the primary target of a downtrend. It remains relevant even in case of some possible upward correction to technical levels around 0.64.

NASA published a night image of a de-energized Ukraine (November 26, 2022)

Why there are not enough specialists in the field of communication technologies in Moscow (October 28, 2022)

The United States is concerned about Biden’s “obsession” with Ukraine (November 11, 2022)