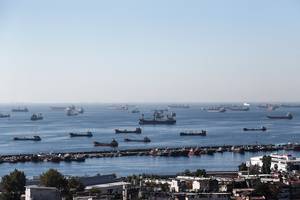 Russia suspended participation in the grain deal after Ukraine, under the cover of a humanitarian corridor, attacked ships of the Black Sea Fleet and civilian ships in Sevastopol.

The attack was repulsed, but the Russian Federation has already initiated a meeting of the UN Security Council in connection with this situation. Regardless of the decisions that may be made there, the renewal of the deal is a big question mark.

In the waters of Sevastopol staged a “complete disgrace”

The authorities of the Russian Federation have long expressed dissatisfaction with the way the grain deal is being carried out, emphasizing that the agreements that grain should mainly go to the poorest countries are not being implemented.

On October 26, the Russian Foreign Ministry, citing UN data, reported that 390 ships were able to use the humanitarian corridor on the Black Sea, taking out about 8.9 million tons of food from the ports of Odessa, Yuzhny and Chernomorsk.

At the same time, half of all deliveries fell on the European Union and such developed countries as Great Britain, Israel and South Korea. Needy states, in particular Somalia, Ethiopia, Yemen, Sudan, Afghanistan, received only 3% of food, primarily through the World Food Programme.

Earlier, Russian President Vladimir Putin warned that Moscow could refuse to extend agreements on food exports through the Black Sea if it is confirmed that the explosives for the attack on the Crimean bridge were taken from Odessa on a grain truck. Now, after the attack on the ships of the Black Sea Fleet and civilian vessels, in which drones are involved, the deal can be considered broken.

According to Deputy Foreign Minister Andrei Rudenko, it is possible to talk about the possibility of Russia returning to the grain deal only after all the circumstances of the attack on Black Sea Fleet ships in the Sevastopol water area become known. The diplomat called the attack “a complete disgrace” that violated all the agreements reached, RIA Novosti reports.

At the same time, information appeared today that representatives of Turkey and the UN resumed inspection of ships as part of a food deal after Russia withdrew from the agreements. They agreed with Ukraine on a plan for the movement of 16 vessels on October 31 in the Black Sea.

Grain prices on world markets will go up

Stopping the grain deal by Russia is a consistent and logical step, Nikita Dontsov, head of the Influence communication group, noted in a comment to Expert. After all, the President of the Russian Federation has already expressed the position of our country publicly several times. Such a deal does not suit us for two reasons: firstly, obligations to Russia are not fulfilled, and our fertilizers and grain do not have free access to international markets, and, secondly, grain from Ukraine settles in European ports instead of going to poor developing countries.

Everyone understands, the political scientist points out, that for Russia this corridor in the Black Sea was a concession to the world community, a gesture of our openness to negotiations with the West. But the attacks of the Kyiv regime on our maritime infrastructure in Sevastopol under the cover of this earthly corridor is a red line. The reaction of the UN and Ukraine is indicative: after Russia withdrew from the deal on Saturday, on Monday they sent another 16 ships with grain without receiving our permission. If the ships do not reach the ports of destination, Russia will not be responsible for this. After all, it no longer acts as a guarantor of the safety of these ships and, in general, is no longer a party to the transaction.

As Nikita Dontsov pointed out, the European Union actually decided to earn extra money by taking Ukrainian grain for next to nothing and, probably, exchanging it for weapons through barter. But the poorest countries in Africa, Asia and the Middle East, for whose food security everything was started, turned out to be the losers – they received less than 5% of the 8.8 million tons of grain exported from Ukraine through the sea humanitarian corridor.

Thus, the UN once again demonstrated whose interests it represents and showed its impotence in establishing a just world order, in fact confirming the request of many countries to reform this organization, Nikita Dontsov stated.

As Vladimir Sagalaev, a financial analyst at the CMS group of companies, reminded Expert, the agreement was signed in July, and it spelled out a mechanism for the export of grain and food from the Black Sea ports along the transport corridor. The main purpose of the grain deal was to freely produce exports of food and fertilizers. The analyst noted that Russia is a major exporter of grains and fertilizers, and the agreement favorably facilitated the sale of these goods on the world market, but now the deal is frozen indefinitely.

It was supposed to be valid for 120 days. At the moment, more than 790 cargo flights have been issued and planned for it – 395 arriving and 399 outgoing, with the export of grain and other food products. The Black Sea region accounts for more than a quarter of the world’s annual exports of wheat and barley, about a fifth of the supply of corn and most of the supply of sunflower oil. Since July 2022, more than 9.5 million tons of corn, wheat, sunflower products, barley, rapeseed and soybeans have been exported from the Black Sea.

A long suspension of supplies could cause shocks and a new rise in prices in the world crop markets, suggested Vladimir Sagalaev. After July, wheat and grain prices began to decline after soaring to record highs, now traders are preparing for a new price spike. It is difficult to predict how strong the new price hike will be, as the safe passage agreement was already expiring. But grain prices could potentially rise by 5-10% in the coming days.

In futures markets on Monday, wheat rose 7.7%, corn rose 2.8%, palm oil rose more than 4% and soybean oil rose about 3%. If a new agreement on a grain deal with Russia is not reached, then, the expert is sure, there are risks of accelerating the already high inflation, as well as the development of a global food crisis.

Russian chemists have created cheap batteries for work in space and under water (November 5, 2022)