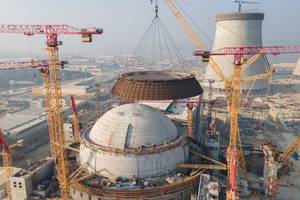 At the first power unit of Rooppur NPP, which is one of the largest foreign projects “Rosatom”, began the installation of the dome of the outer containment.

This was reported by the press service of the state corporation.

The outer reinforced concrete containment is one of the key containment safety systems that protects the reactor plant from external influences and is able to withstand an earthquake, tsunami or hurricane. “A large-sized structure weighing 200 tons and 46.3 meters in diameter was installed in the design position at a height of 48.8 meters. The lifting was carried out by a Liebherr LR 13500 crane and took about five hours,” the Rosatom press release says.

It is also reported that JSC Petrozavodskmash (part of Atomenergomash, the machine-building division of Rosatom) sent eight SPZAZ tanks, made of stainless steel, with a capacity of 120 cubic meters, from the port in St. Petersburg to the Rooppur NPP. m each. SIS are key elements of the passive safety system.

Rooppur NPP with two VVER-1200 reactors with a total capacity of 2,400 MW is being built 160 km from Dhaka, the capital of Bangladesh, in accordance with the general contract dated December 25, 2015. The first concrete was poured on November 30, 2017; At present, the construction of the first and second power units is underway.

Action of the week: Lenzoloto soared in anticipation of dividends (October 29, 2022)

Putin: multipolarity is Europe’s only chance to restore its subjectivity (October 27, 2022)

Income tax increase for LNG exporters to 34% will not affect new projects (November 9, 2022)