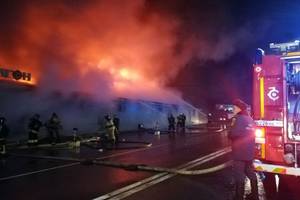 The use of a rocket launcher caused a fire in the cafe “Polygon” in Kostroma, where 13 people died. The person who launched it fled, he was put on the wanted list, TASS was told in emergency services. According to the Ministry of Emergency Situations of the region, a fire broke out in a cafe at night, the roof collapsed on an area of ​​3.5 thousand square meters. meters.

“According to preliminary data, the fire started after the launch of a hunting rocket launcher. From this, decorative elements on the ceiling caught fire, ”said the emergency services.

According to law enforcement officers, the visitor who launched the rocket launcher has been put on the wanted list. Investigators opened a criminal case on the grounds of a crime under Part 3 of Art. 109 of the Criminal Code of the Russian Federation (“Causing death by negligence to two or more persons”).

Message about the fire in the cafe “Polygon” on the street. Nikitskaya in Kostroma was received by the fire department at 02:37. 250 people were evacuated from the building, another 15 residents were evacuated from the outer entrance of the nearest house due to heavy smoke. 50 people and 20 pieces of equipment participated in the elimination of the fire, the fire area was 3500 square meters. meters. At 04:23 a.m., the fire was localized, according to the Telegram channel of the Ministry of Emergency Situations in the Kostroma region.

An Israeli intelligence veteran named the best Russian weapon in the world, which has not yet been used in a special operation (October 28, 2022)

“A week in the trenches, three at home”: Prigozhin proposed a system for training militias (November 6, 2022)

The Ministry of Defense told how they will accrue monetary allowances to the mobilized (November 8, 2022)

Stremousov spoke about the situation on the line of contact in the Kherson region (November 3, 2022)