“Even before, my attention was attracted here by a mansion with a beautiful ebony door. The house seemed deserted and mysterious,” actress Alisa Koonen recalled the time of searching for premises for the new theater, called the Chamber.

It was created by one of the main reformers of the Russian stage, Alexander Tairov (aka Kornblit).

Over the centuries of its history, the “desert house” has experienced numerous transformations, restructurings, expansions and repeated changes of owners. We talk about the Pushkin Theater as part of the project “Moscow house“.

At the end of the 18th century, the building was “old stone chambers” in the parish of the Church of St. John the Theologian. Privy Councilor Prince Ivan Andreevich Vyazemsky ceded them to the brigadier Dmitrieva-Mamonova for 3 thousand rubles. gold. Next, the owners of the property in the Arbat part were the cavalier and colonel Pyotr Alexandrovich Kologrivov, representatives of the old Vyrubov family, who turned the chambers into a two-story empire-style mansion. Then the list of owners was continued by the real state councilor Portnov, who rented the house to the club of cyclists (cyclists) “Moscow”, a music school and a private gymnasium. The next owners are wealthy students of Moscow University, the three Parshina brothers, who received a rich inheritance from their parent.

They turned the city estate into an apartment building, cutting its spaces into apartments for rent.

In 1914, the director Tairov looked in here.

Of course, the enfilade layout did not rhyme much with theatrical functions. Architect Nikolai Dmitrievich Morozov designed an extension to the building, where, with the consent of the Parshins, he placed the stage and the auditorium.

On December 25, 1914, the Chamber Theater opened with a mystical production of “Sakuntala” based on the texts of Kalidas, where dramatic action was interspersed with ballet. The main role in the performance was played by the director’s wife, the daughter of a Belgian citizen Alisa Koonen.

It was this synthetic, “liberated”, multi-genre, arguing with the ideas of realism preached by Stanislavsky that Tairov conceived his theater. 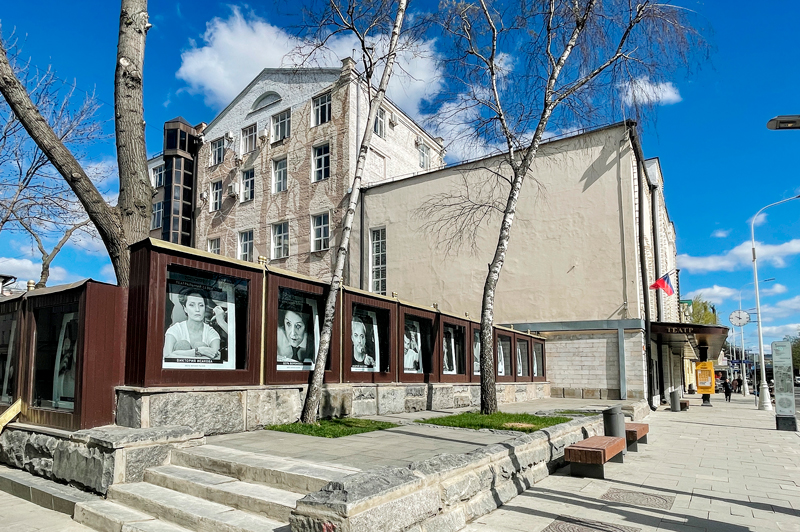 After the revolution, the Chamber Theater was again on the street, and for some time the performances were played in a house on Nikitsky Boulevard, where Anatoly Vasilyevich Lunacharsky went. Fortunately, the People’s Commissar of Education contributed to the return of the Tairov theater to its former building on Tverskoy Boulevard and even gave it the status of an academic one.

It is known that the experimenter Tairov repeatedly involved constructivist artists and architects in his productions – Alexandra Exter, the Stenberg brothers, Alexander Vesnin.

In 1929, the constructivist Konstantin Melnikov received an order for the restructuring of the auditorium of the Chamber Theater and the reconstruction of the facade of the building, in contrast to the main theater entrances, which became a good example of laconicism. 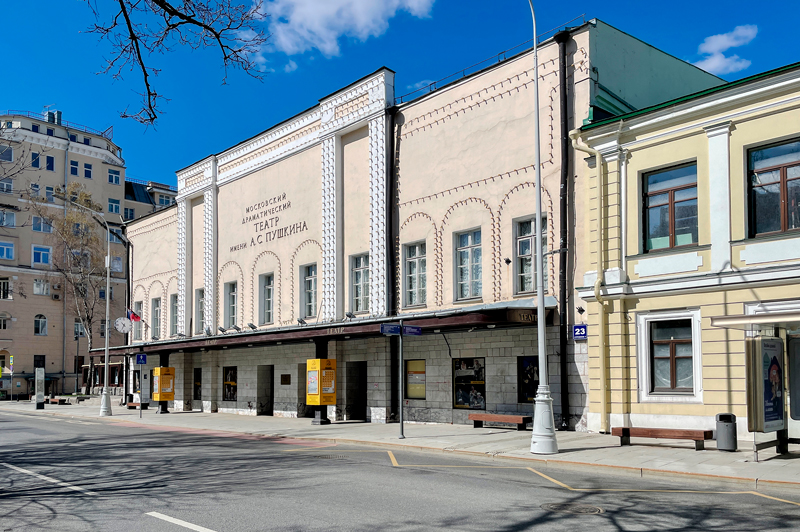 In 1949, in the wake of the struggle against cosmopolitanism, the Chamber Theater was closed. Tairov soon died. In 1950, his offspring was reorganized into the Moscow Drama Theater. A. S. Pushkin. The theater was headed by the winner of the Stalin Prize Vasily Vanin. The auditorium was cleaned with velvet and decorated with a crystal chandelier.

Alisa Koonen never entered this place again, although her apartment was literally across the stairwell from the theater premises.

Build a route to Pushkin Theater RUSSPASS travel service will help you find out about interesting places nearby.