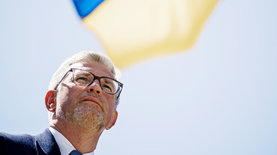 Ukrainian Ambassador to Berlin Andriy Melnyk explained his statement about Ukrainian refugees in Germany who do not want to stay in this country and are returning home. In an interview Ukrinform Melnik clarified that the reason for this is not a bad attitude towards Ukrainians, but the bureaucracy and the desire of many in Germany to “reconcile” Ukraine and the Russian Federation.

The journalist asked Melnyk to clarify his recent statement that Ukrainian refugees, who, according to official figures, are now about 865,000 in Germany, “are allegedly not treated very well here.” These words called indignation in Germany.

“I would like to clarify something. I have never claimed that our refugees in Germany are supposedly treated badly. I literally said that the Germans should think about why many Ukrainians do not want to stay in this country and return home. This is obvious fact,” Miller said.

He stressed that the main reason for the return of refugees home, of course, is the improvement in the situation in Ukraine and the desire to see their relatives. However, according to the ambassador, there are other factors as well – the excessive bureaucracy of the process of obtaining refugee status and the fact that Ukrainians often have to deal with Germans of Russian origin working in the relevant departments for foreigners or employment agencies.

“Unfortunately, until now, many in Germany are striving to quickly reconcile Ukrainians and Russians, which is an absolute nightmare for our compatriots after the traumas they experienced. In the end, my phrase was artificially taken out of context, because it was said during a heated debate at one of TV talk shows of the country, when opponents of the supply of weapons to Ukraine used their favorite reinforced concrete argument “but we are helping your refugees this way,” Melnyk said.

The ambassador added that at the same time he publicly expressed gratitude for the support of the Ukrainians and apologized “to those tens of thousands of German volunteer citizens whom he could offend.”