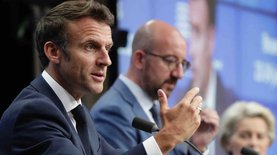 “The message that is being sent today is very clear and we just saw it from the President Zelensky. This is a very strong message, consistent with what our Europe has been doing since the first day of the conflict. Namely: it reacted quickly, historically and unitedly. Through sanctions, two days later and six times since. Through macroeconomic, military and financial support for Ukraine. And now through this political gesture,” Macron said.

“This strong united Europe has coped with the task,” he added.

The confirmation of the European perspective of Ukraine, Moldova and Georgia is “a very strong signal for Russia,” Macron said.

“We are indebted to the Ukrainian people who are fighting for our values, their sovereignty and territorial integrity. And we are also indebted to Moldova regarding its political situation, the destabilization attempts that it is experiencing, and the nobility that it has shown in the mentioned context” the President of France said.

Johnson: We will continue to arm the Armed Forces of Ukraine until they kick out the aggressor from Ukraine – Ukrainian news, Politics

Kuleba hinted at the resumption of work of McDonald’s in Ukraine – Ukrainian news, Economics